The dispute over the Venezuelan presidential election now has a new wrinkle. Venezuela's newly-elected* President, Nicolás Maduro Moros, is not eligible to hold that position under the laws of that country, because he was born, and was raised in, Colombia, according to multiple sources, including the authoritative Colombian publication, Semana. Maduro was born in Cúcuta, which is in Colombia, to a Colombian mother. His sister reportedly holds Colombian citizenship.

Further, interviews with a number of Colombians who are contemporaries of Maduro remember his teenage football-playing days in Ocaña, which is also in Colombia. Maduro is the former bus driver-turned union leader who was personally picked by the late President, Hugo Chavez, to succeed him. 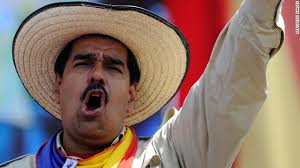 Given the fact that the judiciary in Venezuela has consistently failed to follow the rule of law as set down in the Venezuelan Constitution and statutes, and entered judgments and decrees based upon the orders of senior government officials, do not expect this news to result in Maduro's dismissal. The fallout may, however, further destabilize the country, which is already polarised into pro- and anti-Chavista factions.
________________________________________________________________
* The Opposition claims it has evidence of massive election fraud. The Opposition candidate, Capriles, is presently on a tour of Latin American capitals, detailing the specific instances of the fraud.
Posted by Kenneth Rijock at Thursday, June 13, 2013