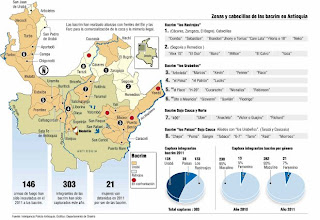 Readers who enquired regarding what Colombian criminal organisation is attempting, without success, to deny you access to my previously-published blog stories about Colombian money laundering, shall now learn the identity of this group. It is the latest generation of Colombian cartel, and possibly the most dangerous, due to its unique partnership with the establishment.

As you know, the United Self Defence Forces of Colombia, more commonly known as the Autodefensas, or the Paramilitaries, were demobilised. A large number of their members then formed what are being called BACRIM, for Bandas Criminales Emergentes, or Emerging Criminal Bands. The BACRIM, which engage in drug trafficking and extortion, have, in many places in rural Colombia, succeeded in associating themselves with local mayors and politicians, as well as local police officers.

BACRIM has a special issue with journalists who cover its activities in detail; It is believed to have threatened a number of them, caused others to relocate, due to fear of physical harm, and assassinated others. Whilst the Colombian Government has recently taken steps to protect journalists, many travel to, and work in, rural areas, where they are at risk.

Since the BACRIM are accumulating criminal profits, from their illegal activities, compliance officers at international banks in the Western Hemisphere would be well advised to institute enhanced due diligence upon high net worth Colombian businessmen, seeking to become your bank clients, and check to see whether they are former ("retired") members of the Paramilitaries, who have reputedly demobilised, and are now claiming to be private citizens; they may be BACRIM money launderers. 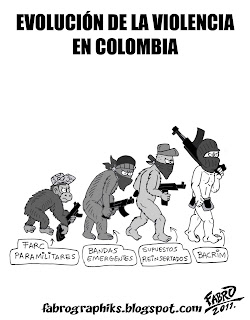