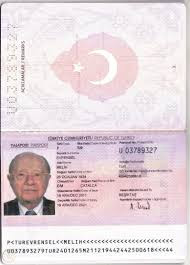 The Government of the Republic of Turkey has granted full citizenship to twelve senior Hamas agents operating out of Istanbul, including the Hamas officials who supervise Hamas' violent actions in the West Bank (Judea & Samaria). Eyewitnesses recently saw the evidence, which were Turkish identity papers, confirming citienship, including  government-issued identity numbers, in the names of Hamas operatives who are actively planning terrorist acfions abroad.

Turkey claims that Hamas is a legitimate political organization, notwithstanding its terrorist designation in the United States, Canada and the European Union, and the ban upon its "armed wing" in the United Kingdom. Indeed, The Erdogan govenment has actively supported Hamas, and Erdogan himself has been seen wirh the Hamas leadership multiple times.

Compliance offiers at internationanl banks must now positively ascertain whether "Turkish" citizens seeking to open accounts are, in truth and in fact, native-born Turkish citizens. While the Hamas agents may be fluent in the Turkish language, their non-native accents will most likely give them away; it is suggsetd that you have a member of your staff who is a native-born citizen of Turkey interview them in person, to rule out any possible Palestinian status. Since Arabic will be their original language, it should not be a difficult task. It is not known whether Turkey has altered their Place of Birth on the identity documents, which is an alternative method of identifying foreign passport holders.

The net result, thank you President Erdogan, is that customs & immigration officers and compliance officers will all be looking for Hamas agents whenever they see a Turkish passport. Let's hope that there is sufficient blowback to cause this policy of giving Turkish passports to terrorist to be cancelled.