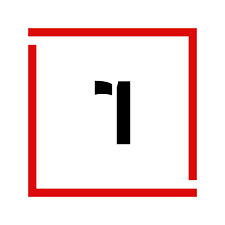 Repubblika is an NGO in Malta that advocates for the Rule of Law and Freedom of Speech, which is important in a country where senior leaders are infected with corruption, and money launderers, such as Ali Sadr, sue journalists, attempting to censor the truth about their criminal activities.

Repubblika took the unusual step of writing to the United States embassy in Malta,  pleading for justice in the case of Ali Sadr Hasheminejad, whose US Federal case was dismissed, notwithstanding a jury verdict of guilty. Though the letter was dated Jun 8, 2020, it was only filed today (8/19), which we find curious. Why wasn't the copy to the US Attorney, or the Court filed earlier ; to avoid bad press perhaps ?

Malta, which expected justice from the US Courts, did not get it. Not only did Ali Sadr walk free, he did not even lose his US Resident status, obtained through a previous spouse, and we imagine neither did his extended family, all living in the Continental United States; Definitely a sweetheart deal.

The circumstances through which the US Attorney's Office conceded multiple fatal Discovery errors, and moved to Nolle Pros the case are suspicious at best, and most likely indicate a behind-the-scenes, well orchestrated arrangement with the defendant, who has access to millions of dollars, as well as evidence that will implicate others. Did he really deserve a total pass on his criminal conduct ? Doubtful, because he has now effectively cheated justice. The appropriate thing to do would have been to have him adjudicated, and use USSG 5K1.1 to impose a sentence commensurate with his
cooperation. If this wasn't enough, the US Attorney could file a Rule 35(b) Motion to Reduce Sentence, if it was justified and necessary to achieve a fair result.

While Ali Sadr could, in theory, be charged with additional crimes, not previous filed, do not expect him to face any additional charges. Repubblika is not going to see justice prevail in this case. Back-room deals, such we see in the REZA ZARRAB case, and probably in this one as well,  cause the public to lose confidence in the justice system. Lawyers in particular, who know what's happening, are especially agitated, when they observe that receiving large amounts of money from criminals is deemed more important than imposing a fair and just sentence upon those who would repeatedly violate the law.

Kindly read the letter, and see why Malta's citizens are angry; they have good reason to be. 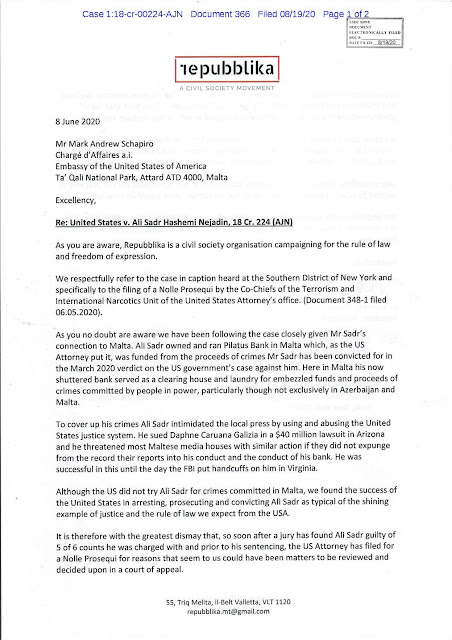 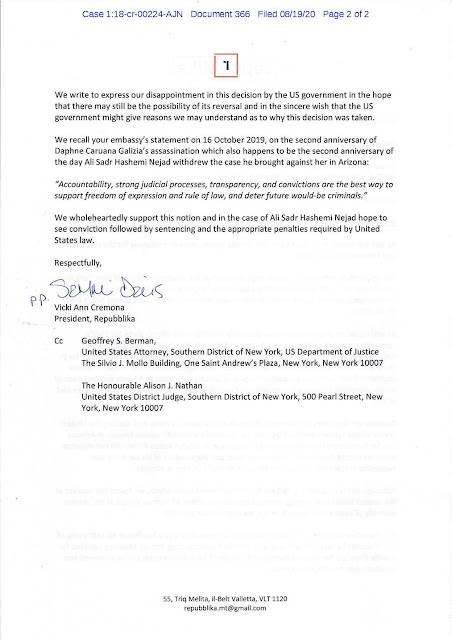