ARE DOCUMENTS IN KRULL FILE, NOW ORDERED SEALED FOR ONE YEAR, PART OF CASE AGAINST MALTESE MONEY LAUNDERERS ?


Hidden in the court file of MATTHIAS KRULL, the former Julius Baer banker who will start his ten-year sentence for money laundering in September, is an order sealing certain documents for a period of one year. Given Krull's involvement in moving dirty money out of Venezuela, through Malta, Switzerland and elsewhere, and the need for absolute secrecy in advance of new indictments, it is a distinct possibility that the Krull case is Ground Zero for the Malta indictments. Can you say Portmann Capital ?

The other day, Krull received approval to relocate to Miami.While this might seem trivial to the uninitiated observer, should the US Attorney want to place him in that residence, while he spends months testifying before a Grand Jury in the Southern District of Florida, it would reduce his level of stress, if he is living at home, and not in the Federal Detention Center downtown. They do want to take good care of their star witness.

Why, you might ask, are there documents sealed for 365 days in Krull's court file, unless they involve his cooperation against others ? Remember, his only method of sentence reduction now is pursuant to Rule 35(b), which only the US Attorney can utilize, and which requires Substantial Assistance, resulting in new indictments or locating major criminal assets for forfeiture.

Truthfully, adding Malta defendants to a case involving millions illegally obtained in Venezuela may just be a sideshow for the Main Event, the eventual indictment of Venezuelan and Iranian nationals, as part of America's "Take no Prisoners" policy against  those dictatorships, but try telling that to the country's former Prime Minister and his ex-Chief of Staff.

Remember this: Krull must take heads in order to have his 10-yr sentence reduced. What did you thing he would be doing, serving  his entire sentence, without trying to better his situation ? Expect to see indictments before the Presidential Election, because in 2020 America, politics trumps justice, and let the casualties fall where they may, Malta's criminal elite as incidental, perimeter players in the laundering drama, but don't tell them that; They might be offended. 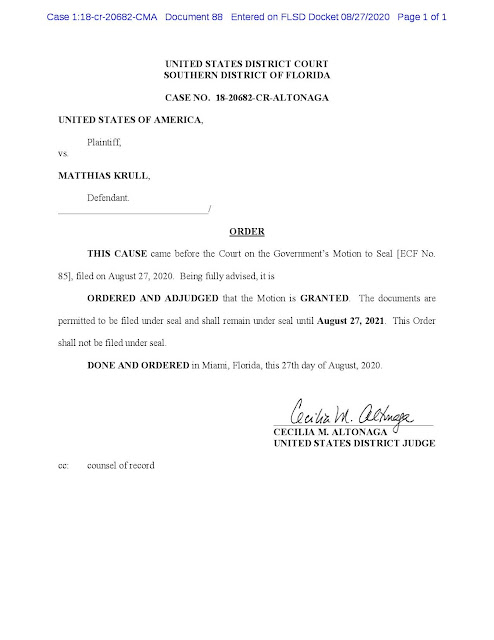