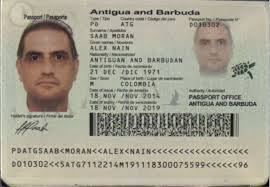 For those readers who are questioning why the accused master money launderer ALEX NAIN SAAB MORAN is reportedly fully cooperating with law enforcement, in advance of his upcoming extradition to face Federal criminal charges in Miami, there are a number of facts that would lead any defense attorney to suggest that he enter a plea of guilty, and render what the US Sentencing Guidelines call Substantial Assistance.

Here are the ones that immediately come to mind:

(1) the eight-count money laundering indictment pending against Saab alleges that he laundered $350m; His Guidelines sentence, given the amount of money involved, and possible multiple aggravating factors, could place him in Federal Prison for the rest of his life.

(2) The OFAC sanctions imposed upon him are another indicator that the weight of the evidence is ovewhelming. Historically, OFAC is not known to make those decisions, which are based upon restricted law enforcement information, lightly.

(3) The US Attorney has Professor Bruce Bagley, who recently admitted to laundering money for Saab, ready as a credible witness against him; it is also believed that there are a number of other witnesses, as well as documentary evidence, lined up, as the Goverment has had years to properly prepare a case against him.

(4) Any Miami jury that Saab will face at trial will most likely include a number of Cuban-American jurors, and Saab's money laundering work for Venezuela's Maduro regime, which is supported by Communist Cuba, long opposed by Miami's Cubans, will work against him.

It is also worth mentioning that Saab has, in the past, communicated with attorneys in the United States, which confirms that he has entertained making arrangements to settle his criminal exposure. He has also made overtures to have the damaging information in the commercial off-the-shelf databases of high risk persons used by compliance officers corrected or removed altogether. He also has has retained an attorney in Miami, which also indicates awareness of his tenuous situation.

His arrest in Cape Verde reportedly was responsible for sheer panic in the East Caribbean countries where he has owned offshore banks, Antigua & Barbuda, and Dominica. Persistent rumors that certain individuals in those countries have already received immunity from prosecution from US authorities continue to be heard, causing further alarm.
We shall continue to monitor developments in this case as they unfold.