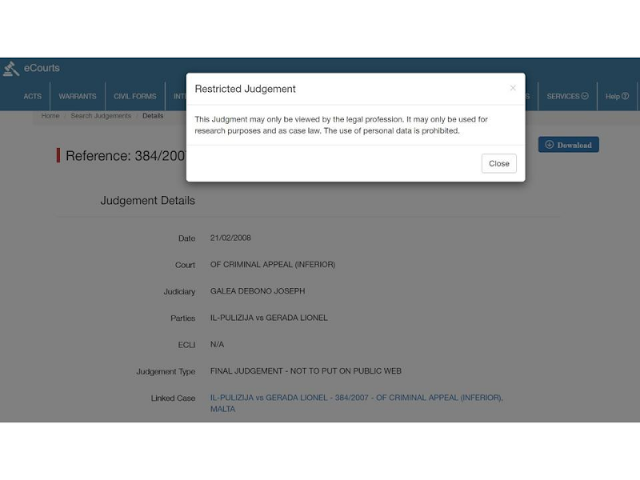 Let's say you are a compliance officer at a major international bank in the City, London's financial district; an individual purporting to be a wealthy business owner from Malta is seeking to open what promises to be a lucrative account relationship. Your due diligence investigation, which includes accessing Malta's online e-Courts database, fails to show that he has any any criminal convictions or civil judgments, and you do not identify him as a government official or Politically Exposed Person (PEP) from web searches, so you approve him.

Big mistake, for not only is he a mid-level government employee, he has a record of two prior felony convictions in Malta, one for embezzlement of state funds,and one for falsification of documents. It seems that this individual had his attorney in Valletta  remove those convictions from the online database, meaning that there is no public access, unless you are an attorney, and then only for very restricted legal research and case law purposes. No overseas bank compliance officer has the time, or money, to engage a law firm in Malta, to search records for every Maltese who comes in the bank's door, looking for services. Besides, look at the language above; Is the lawyer even allowed to disclose what he or she has learned ?

Essentially, those convictions are not to be published, and are considered prohibited individual personal data, under the the European Union's General Data protection Regulations (GDPR). This does directly conflict with the legal requirement that court judgments are always to be accessible to the public.While there is a Right to be Forgotten in the EU, it does not mean that court judgments are to be deleted, and their existence purged from public records. There is NO Right of Erasure under the EU, notwithstanding that some leaders in Malta have created it, literally under the table.

Apparently the culprits are some board, whose members have curiously not been identified, operating under the Ministry of Justice, which review attorneys' requests, and orders court judgments forever deleted from the online database. Can anyone out there in Malta say Star Chamber ?

Going back to our compliance officer in the City, he fails to find the two criminal convictions; as for the failure to identify the customer as a PEP, lower- and even mid-level government employees are often not listed on any government database. Staff attorneys, assistants to directors and deputy secretaries of government agencies generally do not appear on rosters or lists that are publicly available, and since many of them have access to government funds, they cannot be identified as PEPs.

The City compliance officer, who failed to identify his new customer as a PEP, or as a felon, passed him s low risk, only to find out two years later that he moved a large amount of money, believed to be bribes and kickbacks received for approving a lucrative government contract, as well as funds embezzled from government accounts, through the bank, after which he was arrested and indicted.

As you can see, unless Malta not only abolishes this policy of allowing the deletion of criminal records, and restores those which have been removed, no e-Court searches can be trusted to be accurate and complete, and all searches of Malta court records are therefore suspect. Does this mean that all Maltese are now high-risk when seeking service at the world's banks ?