MALTA GETS INTO BED WITH THE MUSLIM BROTHERHOOD, RAISING RISKS OF TERRORIST FINANCING 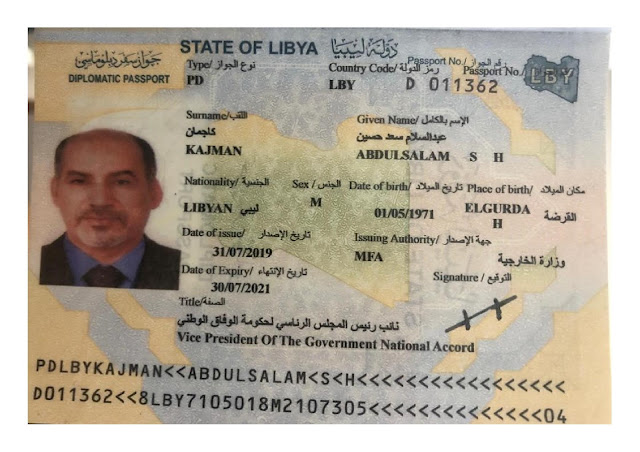 This is ABDULSALAM KAJMAN, a Vice President of the Presidential Council of Libya. He has taken a number of unpublicized business jet visits to Malta this year, to meet privately with Maltese leaders, as well as with Turkish government officials who want a quiet nonpublic place to conduct their mutual business, which is Turkey's military and financial support for the Government of National Accord (GNA) in the Libyan Civil War. Turkey's program has the financial backing of the Government of Iran which, with Qatar, also backs the GNA. We have previously reported extensively on the Iran-Qatar-Turkey Axis supporting the Government of National Accord, which controls only a small portion of Western Libya, but is recognized by the United Nations.

Kajman is believed to control substantial bank accounts in Malta, but whether they are on behalf of the GNA, or are his individual accounts, is not known;  There are Turkish banks with branches or subsidiaries in Malta. We are attaching his diplomatic passport courtesy Customs Malta/Malta Immigration.

Vice President Kajman is a member of Libya's JUSTICE AND CONSTRUCTION PARTY (JCP) which was founded in 2012 as the political party of the Libyan branch of the Muslim Brotherhood, a radical Islamist party banned in Egypt and declared a terrorist organization there. The United States is considering sanctioning the original organization, which is formally known as The Society of the Muslim Brothers.  The Palestinian terrorist organization Hamas also sprang from the Muslim Brotherhood. Turkey recently the Hamas senior leadership in Istanbul, which was strongly condemned by the United States, as some of those attending are not only sanctioned, but wanted for terrorist acts against Americans.

A number of the members of the Justice and Construction Party were named, in 2017, by the Libyan House of Representatives, as terrorists with links to Qatar, a purported supporter of terrorism, which the party denied and considered defamatory. The JCP has also been linked to political assassinations and War crimes in Libya. It supports the imposition of Sharia Law in Libya.

Why Malta, in an era when proven terrorist financing can be fatal to a country's banking industry, not to mention poisoning its relationships with the US and the EU, has chosen to throw in its lot with a known international terrorist organization, the Muslim Brotherhood, and to provide material support, in coordination with nations who are State Supporters of Terrorism, is a mystery. The Members of the European Union have suffered greatly from terrorist acts, and Malta is clearly supporting a group that is known to have committed such Crimes against Humanity, as well as War Crimes. The consequences of this dangerous national policy may manifest themselves as OFAC violations or designations, FinCEN Advisories, or worse. Nobody in Valletta seems to be paying attention; perhaps
Iran is paying them too much money to feel real fear yet.
Posted by Kenneth Rijock at Wednesday, August 26, 2020