IS THE NEW US EXTRADITION CASE IN MALTA A TEST RUN FOR A MAJOR NEW CASE ?


In the news from Malta today is the story about the arrest of Maltese national Nazzareno Mifsud,  who is also a US citizen. Sergeant Mifsud, formerly of Fort Sill, Oklahoma, and who has been AWOL from the United States Army for decades, happens to be on the US military's Most Wanted List, charged with Child Molestation and escape, since 1987, when he jumped bond and fled to Malta to avoid prosecution for this crimes. So why is the United States just now seeking his extradition after 33 years ? Could it possibly be related to the potential extradition of a number of present or former Maltese leaders, and others, to the United States, on money laundering and RICO (Racketeering) charges ?

A close look at Mifsud's extradition documents shows that they were issued back in 2017. Since we know that Malta's current treaty with the United States has permitted extradition since 2006, we can see no reason why the U.S. waited until now to enforce it, unless there is another agenda; to ascertain whether Malta's notoriously ineffective and politically influenced courts will indeed allow extradition in a timely manner. 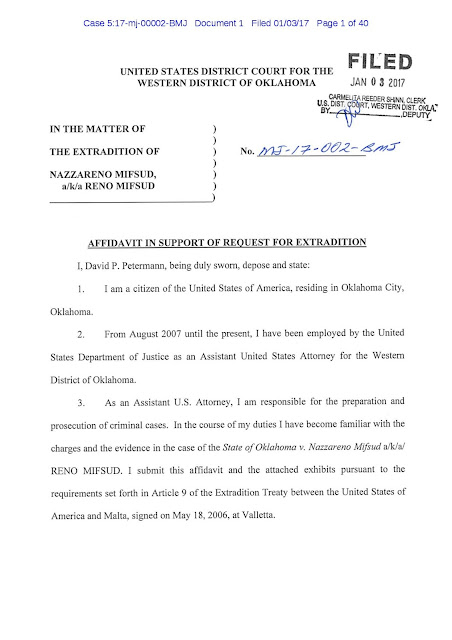 Why is this so important, you ask ? because it could be a dress rehearsal for something much bigger, a major American Federal criminal indictment of those responsible for the movement of hundreds of millions of dollars of dirty money, much if it from Venezuela, through the notorious Pilatus Bank. Potential defendants include senior government officials, regulators, Politically Exposed Persons (PEPs), and the usual Maltese financial crime suspects.

So let's watch the Mifsud case carefully, to learn just how long it will take before the Sergeant is extradited, to face charges in Oklahoma. Then we will be able to determine when some of Malta's most guilty will be retaining American criminal defense attorneys, against the day when they also must face the proverbial "Knock of the Door," and start a long journey towards their ultimate destiny.
Posted by Kenneth Rijock at Tuesday, August 25, 2020