OFFICIAL CORRUPTION IS THE REAL CAUSE OF THE BEIRUT DISASTER 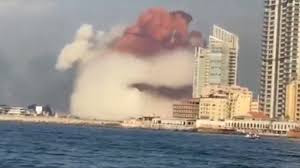 If you were closely following the news about the explosion at the Port of Beirut this week, you may have noticed that the entire port staff were immediately taken in custody in the aftermath of the blast. That's not strictly because of the allegations of negligent and improper storage of highly compustible material; it is because the port is mired in rampant corruption, and the real reason that the shipment was seized while enroute to Mozambique is due to demands for illegal bribes that were not met.

In truth and in fact, so-called "port fees" that the vessel was charged included lucrative, and illegal, fees that amouned to bribes. The additional "vesssel safety deficiencies" that port officials then damanded payment for were also thinly disguised bribes. The vessel's owner actually met the initial demands for illegal payments, but each time he made a payment, port officials required more money, in a vicious cycle of corruption.

Finally, the port staff offloaded the cargo into a nearby hangar, to gain additional leverage upon the cargo owner. Reports from Beirut say that some of the payments went to senor officials inside the government, at the highest level. The owner eventually stopped paying, and abandoned his propertty.

Who is to blame for the death and destruction ? The corrupt government of Lebanon, who killed its own people, and ruined the capital for years to come. With the sharp decline in value of the Lebanese Pound versus the US Dollar, property owners are unable to import construction materials to rebuild.

There's a reason Lebanon's youth regularly protest the endemic corruption that pollutes their country; it exists all the way up to the Office of the President, and shows no signs of reform. Some commentators are now referring to Lebanon as a "Failed State." Whether anyone who was truly responsible for all the dead and injured ever faces justice is doubtful, given Lebanon's long history of assassination investigations that never result in the filing of criminal charges. We expect that port staff and government officials with their hands out for bribes will literally get away with murder.
Posted by Kenneth Rijock at Thursday, August 06, 2020