WITH AN AMERICAN INDICTMENT LOOMING, A NERVOUS PRIME MINISTER COMMITS A CAPITAL CRIME UNDER AMERICAN LAW 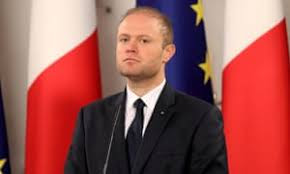 Deer in the Headlights

Malta's disgraced former Prime Minister, Joseph Muscat, has gone underground, fearing assassination by his many organized crime partners. According to witnesses, he has not been regularly seen in public for weeks. His wife, Michelle, who is rumored to also be a target of the investigation, due to a reported money laundering investigation of  her clothing business, has visibly aged. Their children are being home schooled, amid bogus claims that they were bullied at school.

Muscat, who is, according to friends, taking anti-depressant and anti-anxiety medication,  and getting very little sleep, has been actively plotting the murder of a US citizen in a foreign jurisdiction. JM and his associates have allegedly been discussing ways to entice the American to an Eastern European or Caribbean/Latin American location, for the sole purpose of silencing that individual, to prevent him from Exercising his First Amendment rights. This constitutes a very serious crime cognizable under US Federal Law.

Mr. Muscat's untenable legal situation just got worse. The possible maximum penalty for such a crime includes Death by Execution under US law. Perhaps in his arrogance Muscat actually believes that the United States does not have the power to bring him to justice, as a former leader of his government. he might want to read about Panamanian General & President Manuel Noriega, and Turks & Caicos Chief Minister Norman Saunders. Both served Federal Prison time for their crimes; their hubris did not save them.

Will Joseph Muscat accept his fate, or force the United States to prove its case, in a lengthy and costly  trial ? If so, we trust he understands the consequences.