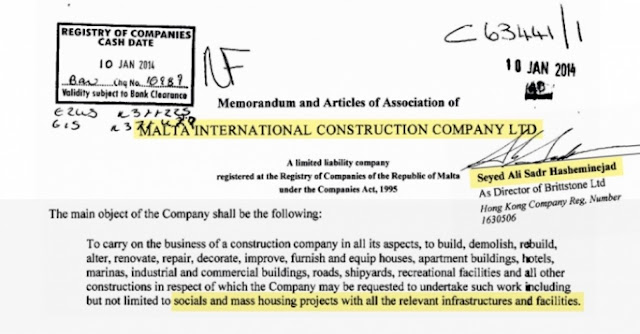 Long before Ali Sadr Hasheminejad's Malta-based Pilatus Bank was evading global sanctions on Venezuelan and Iran, he created a local construction project for social and mass housing. The company, known as MALTA INTERNATIONAL CONSTRUCTION COMPANY, LTD., was formed by Sadr in January 2014, as Director of BRITTSTONE LTD., the same Hong Kong corporation believed to own Pilatus Bank. A subsequent controversy regarding the project, initiated by members of the European Parliament, interfered with its implementation.

Using IIP (Citizenship by Investment) funds to fund construction by a private company, when the Government of Malta had traditionally had that role was openly questioned in Parliament at that time,  as the money would be going to Sadr's Iranian-owned construction company. Given that payment was to be made in Euros, rather than US Dollars, it would have been, if completed, a clever evasion technique, funneling €50m to Iran.

Sadr used a low-cost Venezuelan social housing project to transfer funds that the United States alleged were used to fund Pilatus Bank. Sadr's conviction, after a jury trial, was set aside and all charges were dismissed, in a ruling never fully explained, and which may have been involved in evidence produced in the ongoing cases collectively known as the Malta money laundering investigation, also known as Maltagate. Several members of the former and present government of the Republic of Malta reportedly have sealed indictments on file against them, including former Prime Minister Joseph Muscat, on multiple charges. Those indictments have not yet been unsealed, nor any arrests effected. A number of targets have allegedly been cooperating with US, UK, Italian, French and other EU law enforcement agencies.