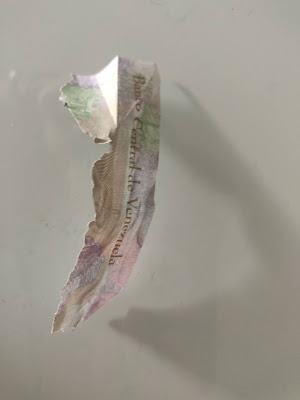 A reader has contacted us with an unusual financial crime tale; he recently was walking his dog when he encountered, on a road adjacent to the Malta Landfill, shredded Venezuelan Bolivars, issued by the Central Bank of Venezuela. He advises that they occupied both sides of the road, and are present in abundance. We estimate that there are at least several billion, if not trillion, Bolivars of destroyed currency.

One of the shredded notes appears above. Note the Banco Central de Venezuela legend. We wonder which elements of the Malta Money laundering organization sent their low-level crew members to destroy and conceal this currency, but who obviously failed to complete their task. This discovery only confirms that the disposal of Venezuelan assets were an additional part of the laundering process, whereby Malta's money launderers also hid assets of their employers, and here destroyed the stash as it became worthless, with the collapse of the Venezuelan economy.

Note: it is remotely possible that the shredded notes are misprints from the De La Rue factory, but we have no information to confirm that it is printing Bolivars for Venezuela at this time. In fact, Another  Reader with personal knowledge advises that De La Rue shreds its currency at the contractor Greenskips, whose quality control is vert strict, and would not allow something like this to ever. happen . This looks like a shredding job done in haste, possibly with a machine not fit for that specific purpose. 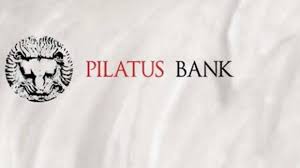 Was this a covert, and substandard, dump from Pilatus Bank of Venezuelan currency that had long been stored in Malta, but which became worthless when the economy of Venezuela tanked ?