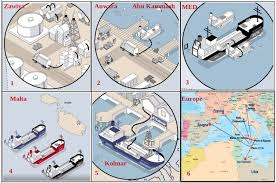 The recent filing of a sealed document in the Iran sanctions evasion case against Turkish government-owned Halkbank raises the question: Is there a link between the Halkbank case and the Malta Money laundering investigation, also known as MaltaGate ? The Malta targets were engaged in protecting the lucrative Libyan fuel oil/gasoil smuggling operation, which resulted in the delivery of finished petroleum products to Iran, for civilian consumption, for which they laundered profits and took a piece of the action for themselves.

While we haven not yet seen any public reference between the Iranian oil-for-gold sanctions evasion kingpin, Reza Zarrab, Zarrab's extensive cooperation was so extraordinary as to result in a rare get-out-of-jail-free card for him, and he must have extensively diagrammed precisely how and where Iran obtained access to gasoil from Libya, and who was responsible for seeing that no arrests were made, and product seized. It is both logical and probable that Zarrab spilled all the innermost secrets of the crews engaged in the smuggling operation, including storage, disguise of  the identity of the contraband oil, and delivery to Iran.

Whether the sealed document represent a sealed indictment, though only conjecture and speculation at this stage, Zarrab's central role in covert global Iranian programs, and his current privileged status, despite having pled guilty, suggests that the Halkbank case is more than it seems to be. Where's the Malta connection ?