FENECH ADMITTED HIS GUILT IN DAPHNE GALIZIA ASSASSINATION, SHOWED NO REMORSE - REPORT NO. 1 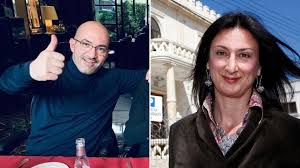 As had already been mooted, this week in Court it was confirmed on Oath by the prosecution that during his arrest, & his interrogation in 2019, part of which was for  the purposes of turning State witness (Prerogative of Mercy), Yorgan Fenech had nonchalantly told the Police that the money he won from betting on the results of the 2017 General Elections were to be given to the assassins and constituted his payment for the assassination. This payment reiterated his criminal involvement & instigation to get the assassination carried out. In other words, it was amounting to full complicity in the eyes of the criminal law,

The Magistrate warned attendees about the criminal consequences of discussing the testimony with others in Malta. We are offering this information for the benefit of our foreign and American readers, and without any intent to violate Maltese law.

Additionally, Fenech candidly stated that he had no remorse for his central role in the murder, as he considered Daphne an existential threat. Whether that factored into the governments' decision not to grant him a pardon is not known known. A Presidential Pardon, also known in Malta as a Prerogative of Mercy, is authorized under Article 93 of the Constitution of Malta, can be granted when the testimony results in the successful prosecution of another for a more serious offense. While it is granted and signed by the President, it is usually recommended by the Prime Minister or Justice Minister.

For those readers who are wondering how such information can be used, as under the laws of the United States testimony offered for the purposes of immunity is generally not admissible, the laws of Malta reportedly allow such statements to be used against the person making them, so long as he has been cautioned and read his rights. Fenech was duly read his rights, upon his arrest when he attempted to escape Malta, and he signed a written declaration at police headquarters, as is standard police practice. He also had the opportunity to consult with counsel before giving any testimony.

We shall continue with Part 2 of our story later this week; stay tuned.