WHO IN MALTA WILL BECOME COLLATERAL DAMAGE AS THE CONSEQUENCE OF US POLICY TOWARDS VENEZUELA ? 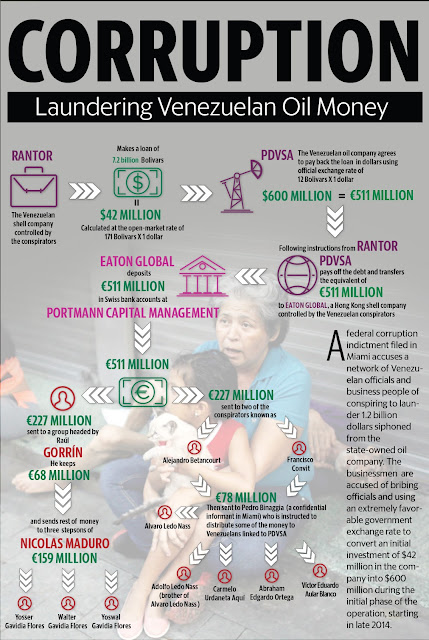 Readers who have been following Malta's Pilatus Bank scandal know that approximately €120m in dirty money "diverted" from Venezuela was moved through Pilatus, enroute to shell and front companies, as a part of an elaborate €600m scheme. Given the current "Take no Prisoners" indictments as expressions of America's position on the Venezuelan regime, one can expect to see more indictments and forfeiture & seizure cases, so long as the corrupt Maduro regime remains in power, and given the extensive cooperation of Malta's financial institutions, and non-bank financial institutions, expect a number of Maltese professionals to be included.

Given the United States' Zero Tolerance for Venezuelan money laundering, with enforcement actions coming as an act of official policy, and Malta's obvious level of involvement with bad actors supporting Venezuela, directly or indirectly, one must expect that the spillover from America's financial attacks upon Venezuela and its patron, Iran, are bound to infect Malta, hitting especially hard upon its fnancial sector, and charging its corrupt past and present senior leadership. This means that one of the massive RICO or money laundering cases against Venezuela, coming down the pike in the near future, will include Maltese bank officers and elected leaders. These will be large, complex cases, with multiple defendants, some of whom may have already commenced their cooperation with US law enforcement, siuch as Ali Sadr Hasheminejad, in order to benefit from immunity's "Get-out-of-Jail-Free-Card" ?

Did Reza Zarrab implicate Ali Sadr, who rolled over on others ? Did Pilatus' officers & directors, such as Hamidreza Ghanbari, who was named a co-defendant, and Luis Felipe Rivera, implicate Maltese government officials, whether elected leader, law enforcement, or regulators ? We cannot say for sure, but the indications are there that someone has been talking.

Remember also that a number of confirmed career Venezuelan and Iranian money launderers who have been either linked to Maltese banks, or are actual depositors therein. Those individuals may choose immunity over prison time in the US, giving up their banking relationships in Malta when detained by American law enforcement agencies, and presented with some hard choices. That may cause attorneys and corporate service providers in Malta to lose sleep, worrying over when the proverbial 'Knock on the Door" will come;  let them remain restless until that day.