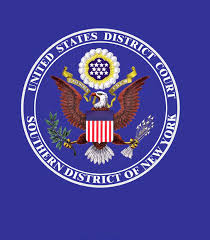 The US Attorney's Office in Manhatten has filed a detailed 19-page reply to the trial judge's order in the Ali Sadr case, responding to each and every question from the Court on Discovery violations, Brady issues, and identifying all the AUSAs, and their direct supervisors, who worked on the case. The judge was clearly angry at prosecutors for their conduct, judging from the questions which are now being answered. The letter was signed by John McEnany who is the Associate United States Attorney for the Southern District of New York, which is the third position in the office in terms of rank, after the USA and Deputy US Attorney.

The letter affirmatively states that the prosecutors did not act in bad faith, nor intentionally withheld exculpatory information, which must be disclosed to the defense under Brady. The details furnished to the Court do confirm that significant Discovery was either furnished late, or not until after the trial, or not furnished at all. Whether that rises to the level of dismissing all criminal charges in a very complex case, after a guilty verdict has ben handed down, is the issue. Admittedly, there were a number of disconnects, including involving the delivery of evidence from the FBI agents assigned to the investigation, but bad faith ?

You may recall that the Court noted that there were major Brady violations from the SDNY, in a case known as United States vs. Pizarro,  which was filed in 2017, and the judge had then required that significant new training on disclosure issues be conducted. Unfortunately, the letter notes that a SAUSA, a Special Assistant United States Attorney, appointed from the New York District Attorney's Office, did not receive such training.

Courts do not easily drop criminal charges in a major case, especially after a jury has decided guilt or inncence, unless the Brady violations are significant, and would have been material to either guilt, or punishment. The evidence at trial does appear to be significant; did the failure to deliver the evidence not timely provided exonerate Ali Sadr ? We cannot say, as it has not been made public.

There's another issue; obviously Ali Sadr has become a cooperating individual; has his cooperation risen to the level where the Government desires to reward him with a dismissal of all criminal charges ? Though rare, such actions do occur, though they are generally not the subject of media attention, as law enforcement does not openly acknowledge it, lest the public ask hard questions about accountability. Look at Reza Zarrab, one of the primary Iran sanctions evaders, who appears to be a cooperator, was quietly released, and has been seen in New York City enjoying dinner at a local restaurant, with a date.

So the question becomes, did the Government choose to let Discovery violations, which obviously did occur, serve as a convenient reason to give Ali Sadr his Get-out-of-Jail-Free card, and is that why the judge asked the SDNY those tough questions ? is that a mjaor favor being granted to Ali Sadr ? Until we have a better understanding of the evidence not provided to defense counsel, we will not be able to answer that question, but we shall be looking into it. 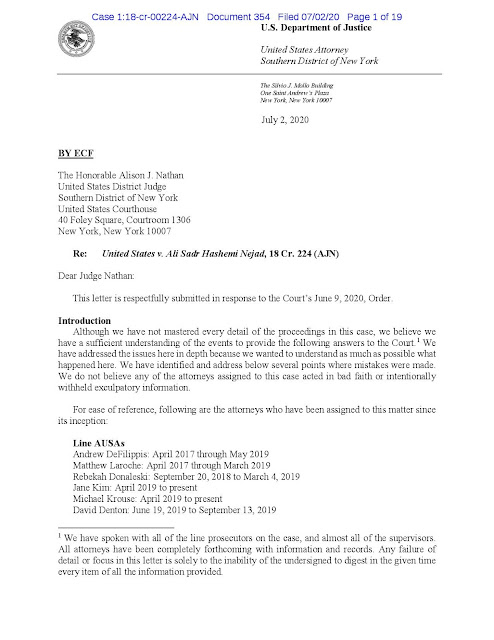 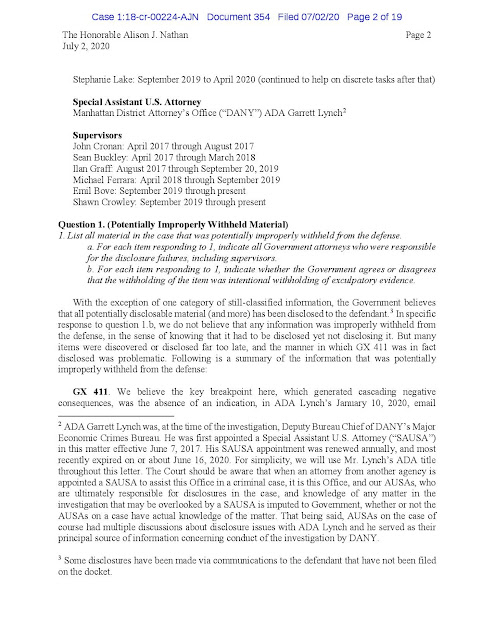