The media are covering the trail of the GULF SKY, a Dominican-registered* oil tanker involved in smuggling sanctioned Iranian Crude, and which was the subject of an intense search recently when it turned off its transponder off the coast of the UAE, only to show up again taking on an illegal cargo of oil off the coast of Iran. We have previously covered the use of Dominica as a registry of convenience for vessels engaged in oil smuggling from Iran, and also into North Korea, but this case is more significant, as it involves money laundering.

Two Iranian nationals, AMIR ABDOLAZIZ DIANAT and KAMRAN ALI LAJMIRY, sought to purcase the vessel, then known as the Nautic, by laundering the $10m purchase price through US banks, a violation of a number of American laws, including the ITSR and the IEEPA, and several Executive Orders signed by the President of the United States. They established front companies to make the purchase appear to be from an Indian company named TAIF MINING SERVICES.

In truth and in fact, Taif was created on behalf of third party companies, as a front to hide the beneficial ownership of the Iranian nationals, through unnamed Iranian companies. The post office box address was in Oman, and ownership was nominally held by two Omani nationals, but Iranians maintained the true ownership of the vessel. There was no effort to obtain an OFAC license.

The buyers sent over $12m through correspondent accounts in the United States, where they were frozen by the bank while transiting the United States. The sellers not having received payment, they made inquiries and started tracking the vessel. After the aforementioned vessel intentionaly "went dark," meaning that it disabled its transponder, to elude the owner, as well as the United States, which was tracking it. Media reports say the vessel was "hijacked," which appears to be part of a scheme to hide it from its lawful owner. 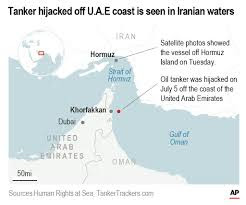 On May 1, 2020  both of the aforesaid Iranian nationals were sanctioned by OFAC, under Counter-Terrorism (CT) designations. Will the unpaid seller take possession of this tanker, in Iranian territorial waters, or elsewhere, or will Iran now keep its prize ?