WHO ARE THE DEFENDANTS IN THE SEALED INDICTMENT IN THE PILATUS BANK CASE ?


If you have been following the money laundering and sanctions evasions case, pending in US District Court in New York, against Ali Sadr Hashemi Nejad, the Iranian owner of Pilatus Bank, the filing of  a sealed document on April 1, which is often a signal that there are indictments, where the defendants are not in custody, and which will remain sealed until they are. There are a number of other sealed documents in the court file, How many of those are superseding indictments ?

The importance of the unknown defendants, and the gravity of any new counts added to the existing charges, may also be inferred from the fact that, on the same day that the sealed document was filed, a Notice of Appearance of an additional Assistant US Attorney was also added to the court file. This prosecutor has a record of handling major cases, and he has a unique international background outside his current position as prosecutor, including working at a United Nations agency, working on an NGO for an Afghanistan project, as a military lawyer, and as a law clerk for a Federal Judge. Is this because there is a high-profile defendant added to the case ? 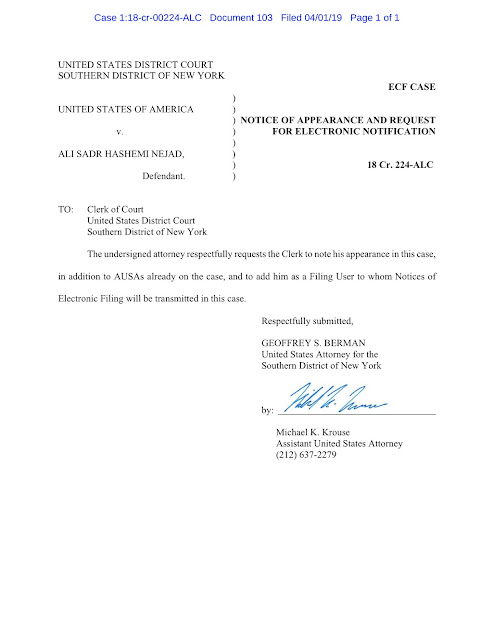 Pilatus Bank numbered among its major clientele the Azerbaijani-Russian oligarch Aras Agalarov, who has had a long relationship with Donald Trump. Aras' son Emin, a popular singer in his country, cancelled his 2019 US tour, and has not come into the United States. Are either of those two individuals party defendants in the Pilatus Bank case ?

Finally, is there a connection between the Pilatus Bank case, and any of the pending investigations  in the Southern District of New York, arising out of the cases that were assigned to SDNY prosecutors by the Office of Special Counsel ? When we ultimately see the names of the the new defendants in Nejad's case, we may be in for a surprise.