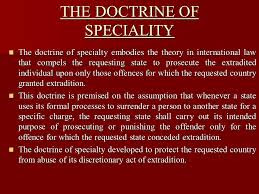 Reliable sources have confirmed that the United States and the Republic of Panama are engaged in negotiations which, if successful, will result in a modification to the existing extradition treaty between the two nations. This will spell big trouble for Ricardo Martinelli, Panama's charismatic former president now on trial in Panama, because a new treaty is said to carve out exceptions to the international Doctrine of Specialty.

The Doctrine of Specialty is an important principle of international law; it provides that a criminal defendant may only be tried for the crime or crimes that he or she was extradited for; no additional charges may be brought once the individual has been extradited to the receiving country. This rule has been incorporated into Federal criminal law in the United States, and it is also the law in Panama.

Apparently, the United States and Panama find a mutual benefit to creating an exception to this rule, which would allow the addition of new charges, provided the country that extradited the defendant consented. The US often wants to pile on additional charges upon defendants extradited from Panama, and Panama has several major other felonies on file that Ricardo Martinelli faces at home, none of which were a part of his original extradition warrant, which was limited to his illegal surveillance upon Panamanian leaders, businessmen and other civilians, and is known as Political Espionage under local law. it clearly wants to be able to prosecute Martinelli for all his crimes at this time.

Will Ricardo Martinelli now be tried on all his pending cases, and spend the rest of his life in a Panamanian prison ? We cannot say, but we will be closely monitoring his case, as well as the effoerts of Panama and the US to change the game on extradition law.