Three individuals who constructed an elaborate, and credible scheme, involving the impersonation of Jean-Yves le Drian, the Foreign Minister of France, were arrested in Israel, after they defrauded a businessman of €8m. The fraudsters constructed an exact replica of Le Drian's government office at the Quai d'Orsay in Paris, reportedly including matching furniture. They are dual citizens of France and Israel.

The con men used the services of a makeup artist to disguise themselves as Le Drian, and his chief of staff, and used Skype to make video calls to their victims. They claimed that they urgently needed funds to ransom individuals who were being held hostage by terrorists, and to conduct hostage rescue operations from ISIS, arms purchases, and covert operations. 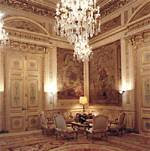 Apparently most of their targets declined, having heard about a prior fraud involving Le Drian, but one individual bought the charade, and paid €8m. The funds were laundered through Eastern Europe, into China, and back to Israel.

The fraudsters later targeted a new victim, and were seeking to take down €2m, when police got involved, which allowed them to identify the members of the crew conducting the operation. Assets of the fraudsters have been seized by the authorities. They will reportedly be tried in Israel, with evidence supplied by French authorities.