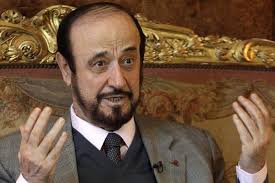 Rifaat al-Assad, the uncle of the current President of Syria, Bashar al-Assad, and the brother of his countrys former dictator, the late Hafez al-Assad, has been charged with organized money laundering by an investigating magistrate in France. Known as the Butcher of Hama for quelling a popular uprising in Syria in 1982,  during which war crimes against civilians occurred. he has been living in exile in France and the United Kingdom since participating in a failed coup against his late brother.

Al-Assad is reportedly specifically charged with these offenses:
(1) Laundering the proceeds of aggravated tax fraud.
(2) Embezzlement of Syrian state funds.
(3) failing to register his security and cleaning staff.

Al-Assad's assets in France are said to exceed €90m; he allegedly holds property through corporations formed in Luxembourg, Liechtenstein, Panama and Curacao.