WILL AMERICA FINALLY GO AFTER ITS SENIOR BANKERS FOR MONEY LAUNDERING OFFENSES ? 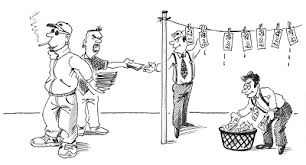 The pointed comments this week, from certain United States Senators, whilst conducting a hearing into monumental, and repeated, money laundering, at the world's biggest banks, about charging those in command for systemic violations, mean that change may be in the air. Paying up to billion dollar fines & penalties, which amount to only a small percentage of annual revenues, clearly does not deter future willful blindness, all in the name of profit; The Senators get it.

Since the Attorney General says that banks can be too big to fail, and US regulators shrink at the mere thought of enforcing the "Death Penalty" for banks, charter revocation, the indictment of senior bankers in command remains the only viable option. The Senators got it right: charge those in charge, ensure that they are banned from future bank positions, and name & shame them publicly with civil violations as well.

America's anti-money laundering war is a dismal failure, when it comes to the world's largest banks. Is it not time for effective AML ? Some may consider this a radical departure, I know, but we need to deter the widespread view that money laundering, in pursuit of major profits, is acceptable, in the financial world.
Posted by Kenneth Rijock at Thursday, March 14, 2013