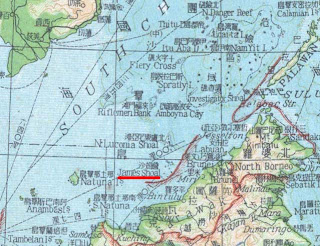 The Chinese PLA Navy sent an amphibious task force to remote James Shoal, a reef in the far eastern edge of the South China Sea, just 80m from Malaysia, which claims James Shoal is its coastal territory.   This action represents the most provocative advance of China's maritime might to date, and could raise regional risk in the South China Sea. James Shoal is 1800 km from the Chinese Mainland; the Peoples' Republic does not appear to have a valid claim.

China's fleet, which consisted of one of its most advanced landing ships, which carries marines and hovercraft, supported by three escort ships, reportedly renamed the atoll "Zengmu Reef," and dropped a subsurface marker to buttress its claim. The Chinese action came uncomfortably close to Brunei for the first time, which is another complication in the calculation of risk in the South China Sea.

The employment of an amphibious task force far south of the Spratley Islands is disturbing; China is clearly pushing its colourable claims to the extreme, most likely testing both the small countries in the area, as well as looking for a United States response, or lack thereof. It also demonstrates China's expanding maritime offensive capabilities, which I am sure is not lost on the Republic of China (Taiwan), which China covets. Curiously, Taiwan still has a historic claim on the reef, but there does not appear to be any factual basis for its claim, either.

Invasion fleets do not belong in the South China Sea; they do not promote peace, and of this is what China has in mind, look for the United States Navy to move into these waters sooner rather than later.