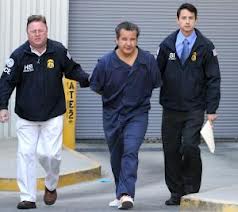 The high-profile case, involving prominent El Paso attorney Marco Antonio Delgado, who has been charged with laundering drug profits for Mexico's Milenio Cartel, has been set for trial on 20 May, 2013. Delgado, also known as Marco Delgado Licon, was subsequently indicted in a different case, both of which have been extensively covered on this Blog.

The United States Attorney's Office in El Paso has filed a notice of its intent to introduce into evidence business records, which include bank and telephone records, at trial. Questions have been raised as to how Delgado, who was a Confidential Informant, managed to run a money laundering operation, when he was supposedly being supervised by US law enforcement. We shall continue to follow all developments in this case, as they unfold.
Posted by Kenneth Rijock at Tuesday, March 19, 2013