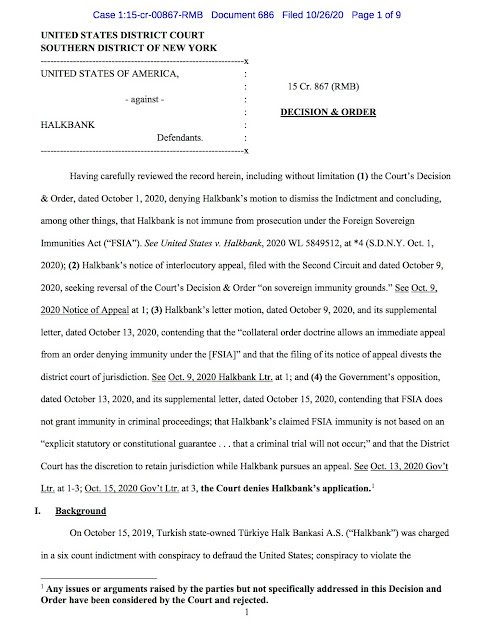 The trial judge in the important money laundering & Iran sanctions evasion case, pending in the Southern District of New York, in a nine-page Decision and Order containing extensive citations to relevant case law, has denied the bank's request to stay the proceedings. The bank's counsel has repeatedly sought to interpose Foreign Sovereign Immunity as a bar to the filing of the case, but the Court, following existing case law, ruled that the FSIA was not applicable to criminal proceedings. The bank then took an interlocutory appeal, and has argued that its mere filing deprives the District Court of jurisdiction until a decision is reached by the Second Circuit. While it is debatable, the law appears to be against the bank.

The Court, while first noting well that "This is Halkbank's third interlocutory appeal and its fifth Motion for a Stay since being indicted," made the following findings of fact and conclusions of law:

(1) Divestiture of the District Curt's jurisdiction will result in unnecessary delay of the trial. The defense has tried every procedural trick and tactic to slow down the pace of the proceedings, and though zealous defense is an ethical requirement, some of their motions were not supported by the law.

(2) There is no legal basis to stay the District Court proceedings indefinitely. This is a criminal case.

(3) The issuance of an indefinite stay would deprive the public of a speedy trial on the merits and the airing of issues of public concern. Any Iran sanctions case involving Turkey is a matter of great public interest, given Turkey's closeness to Iran, and complicity in many Iran sanctions evasion schemes.

The Court denied the motion for a stay, but as a matter of comity, temporarily postponed the trial and pretrial proceedings for 60 day, while Halkbank processes its appeal, but...

It set the schedule for pretrial proceedings, and has set the trial for March 3, 2021.