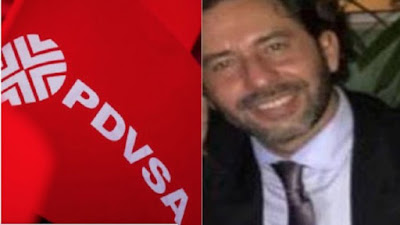 This is the late Leonardo Santilli, a career money launderer  named in the PDVSA investigation in which the Malta money launderers are also targets, who was a dual citizen of both Italy and Venezuela. Signore Santilli was assassinated earlier this year, in broad daylight, in Caracas, by a several motorcycle-borne contract assassins. Charged with multiple money laundering counts in US District Court in Miami, he was openly cooperating with law enforcement, but did not enter any witness protection program (WitSec), or have any personal security protection in place when he was gunned down on the street. There are as many as fifteen other alleged money launderers believed to be engaged in cooperation with the US Department of Justice, in several countries, but Santilli is thought to be the first one to be killed, to prevent him for testifying at trial. Santilli also appears as Leonardo Santilli Garcia.

Why is this of interest in Malta ? Santilli's case is part of the massive money laundering investigation where both Pilatus Bank and Portmann Capital Management Ltd. allegedly moved hundreds of millions of dollars, obtained from grossly inflated PDVSA contracts, in a massive criminal conspiracy to defraud the government-owned oil company. While not named in the Miami indictment of a large number of money launderers, listed as" European Financial Institution 1," Portmann Capital has appeared elsewhere under that pseudonym. It is not known whether he ever visited Portmann's office in Malta, or whether there is any correspondence between him and Portmann officers.

Santilli reportedly personally paid bribes of over $9m to unnamed government officials to obtain procurement contracts; in return he received, and allegedly laundered, at least $145 million in criminal proceeds. He utilized companies in Venezuela, Florida, California and Hong Kong to move the proceeds of crime abroad. His testimony could have convicted powerful individuals in the case, who profited immensely from the fraud, and his violent death was not a total surprise. US authorities have frozen $44.7m in his North American bank accounts, which were held in 17 bank accounts.

Some observers of the Miami money laundering scene, who are familiar with the case, are openly wondering whether the cooperating witness, Swiss banker Matthias Krull, gave evidence that outed Santilli, forcing his cooperation and subsequent assassination. Krull, as we have previously noted, has been working with US law enforcement for more than two years.

Did the yet-unsolved Santilli murder cause the Government of Italy to initiate a criminal investigation ? We cannot say, but, in addition our previous information, regarding money laundering in a Malta fashion house, through manufacturers in Milan, the Santilli case could have resulted in an expansion of the existing investigation.

Perhaps the Malta money laundering targets may, armed with this information, rethink their refusal to cooperate with the multiple law enforcement investigations in progress in Europe and the United States, making sure to guarantee their safety through enrollment in a witness protection program, or to establish some security protocols, for personal safety, and that of their families.

From my experience as a money launderer, nobody moves $1.2bn through any country's banks without being noticed, unless they have  the cooperation of government officials, bank regulators (MFSA and FIAU), compliance officers and even investigators, all of whom would have spotted the transfers, and would have stopped them unless substantial bribes were paid.

Santilli was right in the middle of making arrangements to turn himself in to US law enforcement when he was killed; Malta's money launderers might want to think about that for a moment.