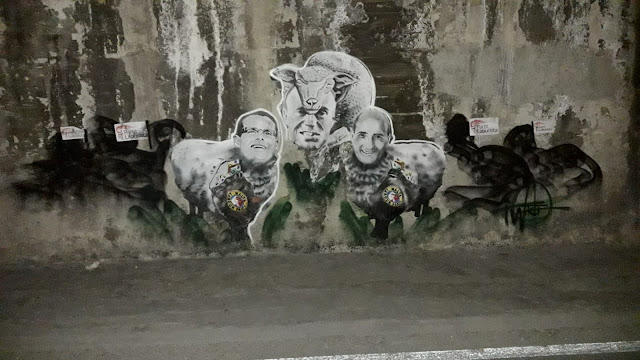 "We're Three Little Lambs that have Gone Astray" by Twitch/Twitchcraft

Sources with reliable connections inside Malta's Office of the Prime Minister have advised that PM Abela, confronted with the possibility that members of his own Labour Party government may very soon be charged in multiple jurisdictions with money laundering, is seriously considering dissolving the government and calling early elections. Under Maltese law, the prime minister has the sole discretion; he must consult with the President and advise him to dissolve government.

This week, government signed an agreement extremely favorable with the country's hunting lobby, involving exclusive use of a wooded area, and a coastal prime site, all done behind the backs of the press and public. It is noteworthy that the public will be excluded from camping and picnicking during hunting season. Local observers agree that government is seeking to lock in votes for any new election, and is looking for more secret deals to guarantee votes at the next election.

Malta is in economic chaos;

(1) There are repeated rumors that the country's finances are on a cliff edge, due to COVID.

(3) The financial services industry has suffered greatly due to the threat of MONEYVAL's probable Grey List designation.

(4) Air Malta is technically bankrupt and urgently needs a bailout.

(5) Add to all the economic issues, Daphne's murder investigation and public inquiry is another reason for the PM to call for an early election.

The question is whether a new election can be had before any indictments of existing government officials make their reelection problematic. The fact that a number of EU and non-EU jurisdictions that are known to be investigating Malta for money laundering has reportedly filled government officials with dread.

Former Prime Minister Joseph Muscat is said to have insisted on new elections, even though they will be two years too early. Muscat's obvious undue influence upon Abela, which has become more and more apparent of late, according to a source in close personal contact, and a failure to deliver on promises he made upon taking office, all lead observers to believe an early election will soon be called.