ALI SADR HASHEMINEJAD GETS HIS BAIL CASH BACK; THERE OUGHTTA BE A LAW 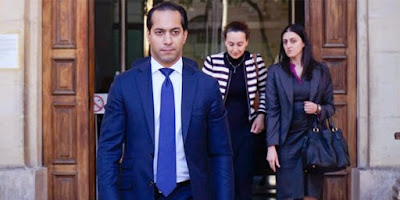 The convicted but now "exonorated" Iranian national and bank owner, Ali Sadr Hasheminejad, quietly received back the large cash deposit he tendered to make bond when initially arrested. We expect that this news will not be greeted positively by the people of Malta, as they uneasily anticipate the arrest of a number of local Maltese officials as well as assisting professionals who have provided legal advice, tactical assistance, and the facilitation of the laundering of the proceeds of crime to those officials.

There was, in the aftermath of Pilatus Bank's exposure as a money laundering hub, a national consensus on insuring that swift justice be applied equally to Pilatus' directors, including Sadr. The dismissal of his US case seriously set Malta's expectations of justice back, and this unreported return of his cash bond may be adding insult to injury.

Will Sadr ever be held accountable for his crimes ? We cannot say, but he must surely have a role in the upcoming criminal cases that we call the Malta money laundering scandal, whether as a principal witness, unindicted co-conspirator, or impeachment witness. Therefore, we wait for the hammer to fall.