THE BOY WITH THE BLOODY SHIRT : A PARABLE FOR MALTA 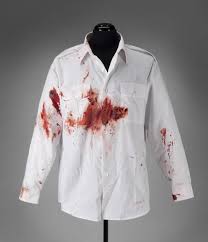 This is a true story. The boy was a young student at a good school. One day, his father picked him upon in His barn van, honking his horn, which embarrassed the boy to no end. You see, his father was a chicken farmer, an honest occupation, but nevertheless the presence of his commercial vehicle, which he used to distribute the fruits of his labors, upset the boy, and he threw himself quickly into the back of the van, so all his friends would not see him, or so he hoped. In his haste, he squashed not only dozens of eggs stored in the back for market, he also crushed a number of baby chicks in the process, as he was quite heavy. His white school shirt ran red with their blood. His classmates thereafter nicknamed him "Knorr," after the chicken soup cube, and he never forgot that day.

The boy grew up to be prime minister, but he did not learn the lessons of his youth; he found himself with evil company, and he once again leaped before he looked. This time, though it, was a criminal act that ended the life of one whose goodness was the exact opposite of his greed and avarice. His shirt was once again bloody red, and this time, he could not get the stains out. One of his classmates from his student days exclaimed " Kill as many chickens as you like, but do not kill fellow citizen journalists who expose you !"What will become of him ?