DID SWISS BANKER MATTHIAS KRULL TESTIFY BEFORE A NEW YORK GRAND JURY AGAINST THE MALTA DEFENDANTS ? 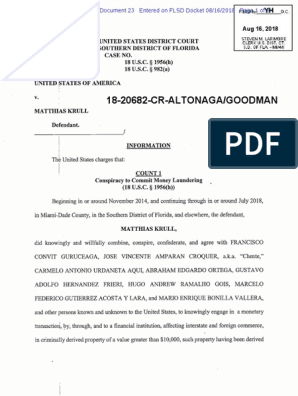 Although the relationship between the Miami and New York investigations of what we call the Malta Money Laundering scandal is obvious, the details remain hidden , with one possible exception. The convicted Panama-based Swiss money launderer, Matthias Krull offers us one tantalizing bit of information, which is, of course, open for interpretation. Allow me, please.

A careful review of the docket sheet in United States vs. Matthias Krull indcates:

(1) A court-approved visit to the Middle District of Florida, ostensibly for a son's soccer tournament.

(2)  A court-sanctioned religious retreat, wherein it is alleged that attendees cannot leave for any reason, and that an Assistant United States Attorney will be there, acting as a volunteer.

(3) Court-ordered travel out of the District, but details not available.

Did Krull journey to New York City to testify before a Federal Grand Jury in one or more New York cases during Number 3 ? Was the information regarding trips Numbers 1 or 2 actually disinformation, to mask travel up north in support of those investigations, so as to confuse anyone seeking to learn whether Krull was a potential witness in a New York case or cases ? We cannot say, but the extremely favorably treatment that he has been receiving so far, especially allowing him to postpone commencing his 10-year prison sentence, could mean that his testimony is so crucial that prosecutors want him available immediately, and not through the usual tedious Bureau of Prisons/Court request procedure.

Anyone questioning my judgment on this set of facts need only look at the FIFA corruption scandal, where one of the key witnesses, Vice president Jeffrey Webb, has actually been allowed to remain under house arrest for five years, while he assists in the indictment of more senior FIFA officials. Long-term arrangements with special witness do occur, though often far from the glare of media coverage. Should the Malta money laundering targets fear the impact of his testimony ? Absolutely; he is a qualified professional, and expect his testimony to be extremely credible at trial. Perhaps they had better follow the advice wisely given on this blog, and enter into plea negotiations, before others take advantage of such an opportunity, and they have been thrown under the bus. Think about it, Mr. Abela and Mr. Muscat; It's your future.