The US Treasury has named Mexican lawyer Jose Antonio Nuñez Bedoya, also known as "El Mayo", as a Specially Designated Drug Trafficking Kingpin (SDNTK). Nuñez, who reportedly formed front companies, and laundered narcotics profits, for the Sinaloa Cartel, was involved in suspect real estate purchases, and with cash-intensive businesses controlled by the cartel. 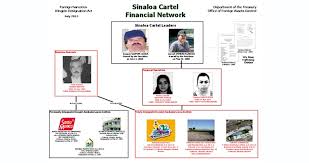 Any reader who wants to see a full-size version of the above chart can view it  here.
Posted by Kenneth Rijock at Thursday, August 01, 2013