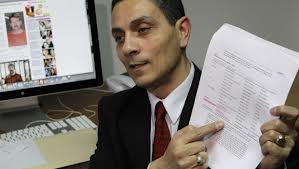 Something unusual is going on in the Federal criminal case against accused Viktor Bout money launderer, Richard Chichakli. The defendant's oral motion to represent himself, which has been universally reported by courthouse observers, is not supported by an order or filing. Though there have been several media statements that his case is going to trial in November, no trial date has been posted. The withdrawal of the two appointed private defense attorneys as counsel of record has not been the subject of any published order, and there are no new sealed pleadings in the file this week.

So I ask the question; is Richard Chichakli going to trial or not ? Is all this simply a smokescreen for his cooperation, and will we see additional indictments ? As Viktor Bout's primary financial officer, he has a lot of secrets to tell.
Posted by Kenneth Rijock at Tuesday, August 13, 2013