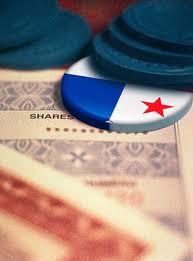 According to reliable local sources, the Republic of Panama is under intense international pressure to outlaw bearer shares for corporations, in any form. You may recall that recent legislation allows them to continue, albeit under certain restrictions*.

The parties named as among those pushing for reform of Panamanian corporation law are the United States, Canada, and the European Union. Bearer share fraud, where a trusted intermediary, generally a banker or financial services professional, literally steals the company, and its assets, but taking possession of the shares of stock, and exercising control over them, is widespread, and have been seen to targets Europeans and North Americans living or working in Panama.

Some of the Panamanian judges require the owner of a bearer share certificate, if he or she was not issued the stock at the time of incorporation, to produce a Bill of Sale that itemizes the assets, but inPanama's notoriously corrupt court system, justice is not often served for the complaining party.