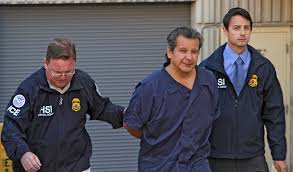 A Federal Judge in Texas has found an accused  money launderer, El Paso attorney Marco Antonio Delgado, competent to stand trial in two separate criminal cases.. Delgado is an alleged money launderer for a Mexican cartel, and is said to have moved $600m in illicit profits. He is also charged with illegally diverting funds for a Mexican energy project.

Rumors have it that his own lawyers had requested the psychiatric examination, (moving documents are sealed, so we have no way of verifying this information) because he had reportedly steadfastly refused to enter a plea in the case.  Perhaps he feared his life would be in danger, should he cooperate with law enforcement, and any plea agreement would recite cooperation. Attorneys generally are aware of the consequences, when they assist law enforcement against particularly violent criminal organizations.

The issue is moot, because he was found competent by the court. The court has, however, stated that he will be undergoing a neurological examination, due to a reputed head injury suffered while in custody. Was this a prosecutorial ploy to deceive his former clients ? We cannot say, but there are a large number of sealed pleadings in the court file.

We shall continue to follow all developments in this matter, and report back to you.