DOES BO GUAGUA HAVE BO XILAI'S STASH OF US CURRENCY ? 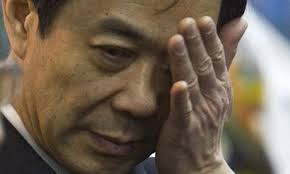 Testimony from the ongoing criminal trial of Bo Xilai, and made available by the Government of China, indicates that Bo's wife, Gu Kailai, often raided the family's safe, which was said to contain large amounts of Yuan, and tens of thousands of dollars in US currency. The questions now arise:

(1) Where is that cache of US Dollars now, and does the son, Bo GuaGua, have access to it ?
(2) How did a Chinese PEP acquire a large load of dollars ? Did he accept bribes or kickbacks from American-based companies seeking to do business in China ?
(3) How deeply was Bo GuaGua involved in the corruption ? There has been testimony, from Chinese businessmen, that he accepted "gifts" amounting to a large sum, from them. What else did he do, and did he accept illegal cash payments, outside China, in the UK or US, on behalf of his father ?
(4) Are there any hidden real estate, or bank account, assets, of the Bo family, in the UK or the US ?

Isn't it ironic: the son of two obviously corrupt Chinese PEPs is admitted to one of America's most prominent law schools, notwithstanding that there are questions about how his education has been paid for, about his acceptance of expensive gifts, from Chinese businessmen,  and about his own conduct. I guess this means that Columbia Law School admissions officers do not perform due diligence investigations on their applicants.