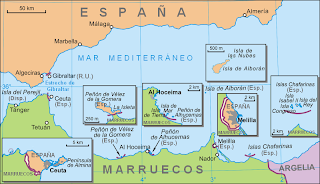 While the world's media is focused on tensions, created by Spain to focus attention upon its colorable territorial claims to the British Overseas Territory of Gibraltar, curiously there is no attention being paid to the status of the five Spanish enclaves in Africa. Yes, I said five, not just Ceuta and Melilla; there are three more that deserve mention, since the Spanish Foreign Minister is talking about vestiges of colonialism.

Spain says that Ceuta and Melilla both have a 100% ethnic Spanish civilian population, and therefore, under the UN provisions regarding the right of self-determination, are properly Spanish territory. I understand that, but what about the other three ?

The three conveniently not being discussed have no civilian population whatsoever, and are staffed solely by members of the Spanish military. They are:

The above are all military installations; in prior periods, they were regarded as fortresses. My understanding of Spain's professed need to maintain these vestigial possessions is for reasons of Spanish National Security and defense. I ask you, in the 21st century, where Spanish fighter aircraft can reach any part of Spain within minutes, what does Spain need with old rock forts in North Africa, far from its territory, and on the wrong side of the Straits of Gibraltar ?

Perhaps these territorial holdovers from the Spanish colonial era should be transferred to Morocco, whose territory they certainty are, before Spain again engages in saber-rattling over Gibraltar. People who live in glass houses shouldn't throw stones, in my humble opinion.