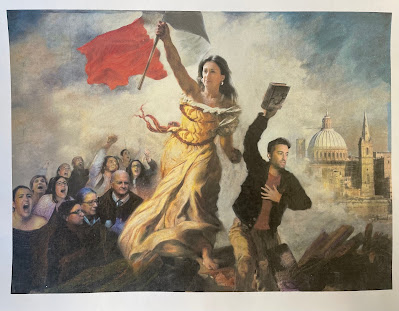 I shall attempt to summarize the key points contained in the position of the Nationalist Party of Malta in its policy in the aftermath of the FATF grey-listing, using an English translation of the Position Brief of Opposition leader Bernard Grech. I have sought to extract his principal proposals and position points.

1. Set up a NATIONAL TASK FORCE, using experts and politicians,  to recognize the problems and start solving it, to have achieved that before the FATF meeting in October.

2. The Government must submit to the Parliament all the correspondence and materials from the FATF, including but not limited to the detailed FATF report with the Action Plan recommended by it.

3. Prime Minister Robert Abela, without delay, publicly deny Joseph Muscat, admit his sordid legacy, exempt Muscat from the highest honours of our country, dismiss him from the Labour Party. Otherwise, he cannot repair what Muscat has broken. Place blame where it belongs, unless you are proud of what has occurred.

4. Parliament will entertain a series of urgent requests regarding the Action Plan.

Every day on the grey-list is a day of missed opportunities for investment that does not come to our country, and for jobs that may have been created here, but will be created elsewhere. The Nationalist Party, which has the credibility that the Labour Party lacks, is ready to work together, giving the Government one last chance to forget about arrogance, and for once act in the national interest.

While we do not as yet know the details of the Nationalists plan, it must include:

(2) Bringing money laundering and corruption charges against Joseph Muscat, Michelle Muscat, and a number of ministers and Labour politicians.

(3) Finally moving against the Gasoil smugglers, Tuna Launderers and narcotics traffickers that poison Malta. I would hope that the cocaine smuggler receive special attention.

(6) Reinstate career secretaries in all the ministries, to return Maltese government to normal, not political, operation.

(7) The resignation of Robert Abela, and possible charges for his actions while an advisor to the Planning Board.

(8) Request assistance from the European Union to accomplish the above.

To have any chance of removal from the Grey-list, Malta simply must be reformed from the ground up, lst it further sink into the status of a typical corrupt, dysfunctional Middle Eastern dictatorship.