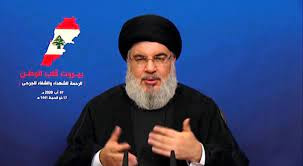 Multiple sources in the Middle East have claimed that HASSAN NASRALLAH,  the leader of the designated Lebanese Shi'ite terrorist organization, Hezbollah, has died from complications of COVID-19. The leader, in his last media appearance, appeared tired and ill, and repeatedly coughed and wheezed. Official Hezbollah sources have denied the story, and asserted that he only has pneumonia, and did not pass away.