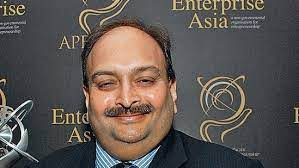 The Indian national, Mehul Choksi, whose attempts to slip away from Antigua, and escape justice in the United Arab Emirates, not only backfired, but resulted in his being kidnapped and beaten, and dumped into the hands of a very unfriendly government in Dominica, who has now charged him with a serious crime. He is now at the mercy of a local legal system known to be corrupt, greedy lawyers on both sides, seeking to profit from his situation.

The local courts have set his cases as follows:

(1) The next hearing on his attorneys' Habeas Corpus petition, which challenges Domincia's legal right to hold him, will be on July 2. This case is before the East Caribbean High Court. If granted, he could be immediately released.

(2) The Illegal Entry case will next be heard on June 14, by the Magistrate. Maximum sentence if convicted reported to be five (5) years.

Rumours are flying around both Antigua and Dominica. Choksi was going to hide out in Cuba; Choksi was entrapped in a "honey pot" scheme by a local female operative. Choksi cannot be convicted of Illegal Entry because he had no Intent to commit the crime which he has been charged with, as he arrived in Dominica involuntarily; he will be convicted because he was in the process of  illegally fleeing Antigua when he was kidnapped.

The rumours go on and on.

While some legal observers believe that Dominica wants Choksi deported as soon as possible, others fear that his cases will fester in the country's dysfunctional court system for a very long time, citing the fact that it took the United States more than a decade to extradite Antigua's former government regulator Leroy King from that country. Dominica's courts, which are known to favor the whims of its senior leaders over the Rule of Law,  could see that Choksi is caught in its legal web for years.