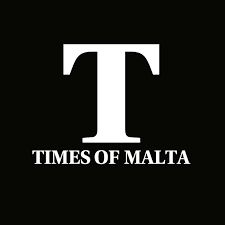 Malta has been in the news recently for all the wrong reasons, not just because of a shocking assassination of one of the country's leading female investigative journalists, but now, in the last couple of years, because of persistent money laundering and corruption allegations at the highest levels. So what has happened to Malta's moral compass for a nation that has more card-carrying Catholics per capita than almost anywhere else in the world, and a country that I have been so proud of, up until recently ?

I am a dual national, British and Maltese, because of my great grandfather, Lord Strickland, who himself survived an assassination attempt on his life, when Prime Minister of Malta, between the two World Wars. Since I inherited property in Malta from his unmarried daughter, the Hon. Mabel Strickland OBE, which included shares on Allied Newspapers Ltd. (the country's leading English-speaking newspaper group, which publishes the Times and Sunday Times of Malta), I have had to endure my own very real experiences of Malta's corruption for the past thirty years.

Let me expand on this Maltese scandal. It is a story of how a clique of self-entitled people have sought to hijack Malta's prestigious newspaper group. Allied newspapers Ltd., by stealth over several decades. They have done so in order to advance political careers, influence public opinion, and enrich themselves, at the expense of my inheritance, and at the expense of the workforce and future of the newspaper's employees. Let me explain how I believe this heist was carried out by the two Executors of my aunt, who were Guido Demarco, a leading criminal lawyer in Malta at the time, and Prof. Joseph Ganado, a leading commercial and civil lawyer during that period.

1. First, identify an Old Lady in her declining years, who owns an influential newspaper group, yet never married. and so has no immediate family living with her.

2. Work with the Prime Minister to get her previous lawyer to resign, by arranging for him to be promoted to a judgeship. Have yourself introduced by a trusted intermediary, and ingratiate yourself into this Old Lady's life enough to be appointed her new legal adviser, and then get to work on her legal affairs.

3. Arrange for the family heir to be marginalized, by having his proposed adoption by the Old Lady blocked by a change in the Constitution of Malta, with retroactive effect. Follow this up by getting the Government to have her heir (who was a British national at the time) declared persona non grata, and barred from returning to Malta for more than nine years, for no valid reason. Both of these actions were carried out in 1977 and 1978, just to frustrate the Old Lady's Strickland succession plan.

4.Obtain from the Old Lady a SOLE Power of Attorney to act on her behalf, in case she gets ill before her heir is able to return to Malta.

5. Then, in 1979, persuade the Old Lady to 'revise" her will. Draft the will yourself with the assistance of another legal colleague who is prepared to help carry out the plan for his own reasons.

6. Further marginalize her heir by persuading the Old Lady to replace her previously planned Strickland Family Trust  with a new Strickland Foundation, set up supposedly "for herself and her heirs in perpetuity," but ensure that you and your other legal pal are named as her joint executors after her death, and also as two of the Council Members on the new Foundation. Finally, ensure that the Old Lady's key assets are not left to her Strickland heir, but to the new Strickland Foundation. In this way, you will have all of the major assets of the Old Lady Strickland's estate within your personal control when she dies.

7. When the Old Lady then asks you, as legal adviser, to go to London to explain to her Strickland heir all these changes, and the reasons for them, fail to meet him on that trip, and ignore your client's instructions  completely, so that the heir cannot ever alert his aunt to the risks of these significant changes to the Strickland succession.

8. A few weeks later, when you hear of a planned political riot aimed at the newspaper, fail to pass this knowledge on to the Old Lady, or the management at Allied. As the result, the headquarters is firebombed, and so badly damaged that this causes the Old Lady to suffer a heart attack, from which she never fully recovers.

9. After the Old Lady dies, make every effort to persistently block the heir from participating in  the foundation, or family newspaper group, and promote your own offspring and friends instead.

10. Be sure to cover your tracks; after the Old Lady dies, hide all of her family and legal administrative papers, so that her heirs cannot find out what his aunt intended by the changes in 1979, and whether she would have wanted to set up a conflict upon her death, between the Strickland heir and the Strickland Foundation. Note: This is significant since this well-organized Old Lady always left clear instructions to he heir and her Executors about her intentions, in her previous wills, yet no explanations or draft copies of legacy correspondence have ever been produced by the Old Lady's lawyers that would no doubt shed light on her extremely confusing 1979 last will.

Following Mabel Strickland's death, the majority shares in Malta's leading English-speaking newspaper group are no longer controlled by the founder's family, but have fallen under the control of the family of one of her Executors.

Indeed, for twenty-two years after her death, the shares were held in the personal names of the joint executors, on behalf of the deceased's estate, until the disputed 2010 share transfer. All the executors now have to do is simply ignore any attempts at Mediation, or protests from the heir, or from other shareholders, whilst one Executor certainly promotes his political career, together with his family and friends, at the expense of the heir, and whilst enabling other employees of the newspaper group, and other hangers-on, to help themselves to as assets built up over 85 years of hard work, by the disenfranchised minority shareholders and the loyal and hard working staff at Allied Newspapers. It is a scandal.

This scheme seems to have been a well-thought out strategy, but there are a few major problems that the Executors had not counted on:

A. Robert, as sole heir, is challenging the Executor's self-serving interpretation of the 1979 will in 2010, by filing a court case (36/2010) which was decided in 2018, during which the judge criticized the Foundation and executors for their harassment of the heir and his family.The judgment, finally entered in 2018, was immediately appealed by both parties; the appeal has not yet been heard.The details of  the original bequests, and their valuations, were prepared by Demarco's brother-in-law architect, Paul Camilleri, and the notary public used to open and transcribe Mabel's handwritten will was another Demarco relative, Schrieha, and mistakes in transcription were made.

B. When the Executors immediately responded to Robert's court action in 2010, by secretly and illegally authorizing the transfer of the majority shareholding in Allied (78%) from themselves to the Strickland Foundation, they failed, totally, to seek the permission of the heir or the courts. No valid instrument of transfer was ever produced by the executors, who have since died. We now know that this was done despite the Executors knowing that this was an illegal transfer. Furthermore, this was fully 22 years after they should have made a decision on who was the legitimate owner of these shares. the heir has challenged this transfer in another court case (1136/2015) which is still in court, currently. This illegal transfer was subsequently recorded in a reconstituted  share register by the company secretary of Allied, Clinton Calleja, who (yes you guessed it) just happens to be an employee of Demarco &  Associates. Allied's original shareholder register is allegedly conveniently lost, and it does not take a fool to work out why.

C. The Strickland Foundation is barred by law from being a shareholder of Allied, pursuant to its Articles of Association, because it is a "Body Corporate,"and as such cannot legally be a shareholder in an exempt private family company. Had the original proposed Strickland family trust plans not been superseded, with Robert as the named beneficiary, then the trust could have been a shareholder.

D. An attempt by the heir, to enforce the law regarding the questionable legality of a charitable foundation controlling a profit-making enterprise, in this case a newspaper, pursuant to §32A of Chapter 16 of the Civil Code, was blocked by the now-disgraced Adrian Hillman, at an extraordinary shareholders' meeting in March 2013,.Hillman refused shareholders to vote n the issue of Section 32A and so kyboshed the meeting. Advice was also received from the Foundation's solicitors, who happened to be connected to Mario Demarco, and to Austin Bencini, who formerly operated Guido Demarco's political campaigns.

E. An attempt to get the behaviour of the Strickland Foundation investigated by the Attorney General, Peter Grech, met with no interest at all, despite the Foundation having improperly received  more than €3.5m in dividends from the newspaper group, even before they were registered as a shareholder in 2010, and where the Foundation was prohibited from being a shareholder. This fact alone should have attracted the Attorney General's attention.

F. The Court of Appeal ruling in 2018 held that the Strickland Foundation, and the executors' families had to disclose to the heir all of his aunt's documents, and to cease hiding behind legal privilege arguments, as the heir was in effect their client, and not their adversary. To date neither has complied with this court order.

G. The Executors made desperate attempts to try to persuade the Malta Financial Services Authority (MFSA) to state that the transfer would be valid, just before making the transfer. if any such advice was given,, Robert has established that this was not within the MFSA  remit, to offer up legal advice on the status of any foundation, and contends that the advice that the MFSA allegedly gave the Executors was contrary to existing law, Ultra Vires,  and therefore should be considered null and void.

H. What is even more curious is what followed, in 2013, with an amendment to Companies law, on the precise definition of a "Body Corporate was passed." This change in the law, which was actually disguised as a "budgetary amendment," by the outgoing Nationalist administration, and passed by the incoming Labour administration,  appears to be a solution to one of the foundation's problems, notwithstanding that the effective date could not precede the date of passage of the law. Although the now-disgraced former Prime Minister, Joseph Muscat, was asked to identify the author of the amendment, he failed to provide an answer, and it has never been explained who proposed or guided this amendment through Parliament  during this time period.

I. Whilst Guido Demarco, and later Mario Demarco, and their friends and associates, have been able to block any of this story from being published in Maltese printed media, these individuals cannot stop electronic media from picking up this scandal, with its injustice, and publishing the facts in full.

The Strickland Foundation's administration, since Mabel Strickland died in 1988, has been irregular, illegal, improper, and discriminatory towards her heir. The authorities and the police need to investigate this arcane and maladministration, that had received more than €3.5 million alone, in dividends, from Allied newspapers, between 1988 and 2010, when it was not, and could never be, a valid shareholder. 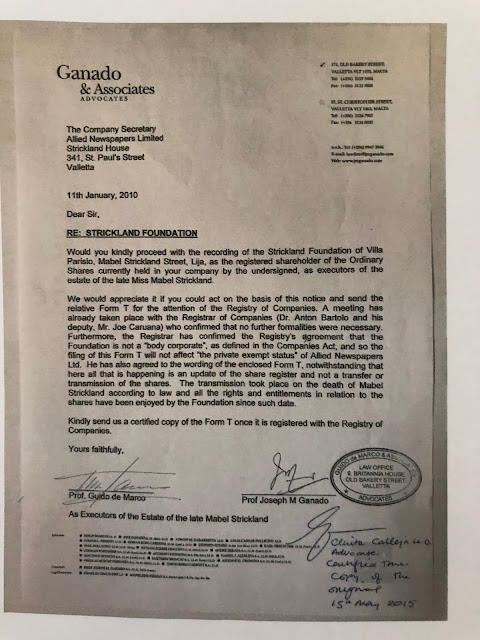