CONVICTED FRAUDSTER'S MALTA ATTORNEY DENIES HE WAS INVOLVED, BUT THE EVIDENCE SPEAKS LOUDER

After our recent article, Slovakia's most notorious $75m Convicted fraudster, Marian Kocner, had a $6m Account at BOV, and Many Malta Connections, has resulted in what amounts to a general denial from Malta attorney Christian Ellul. We note that Malta has previously ruled that Mr. Ellul lacks both "Honesty and Integrity, " as the MFSA decision concluded, as a matter of law.  See the MFSA Directive below. He was banned from holding any directorships for a period of five years.

How are we to believe his statements ? Also, the Malta Gaming Authority found him not "fit and proper" to hold a gaming license. It held that he was of "insufficient integrity and good repute." 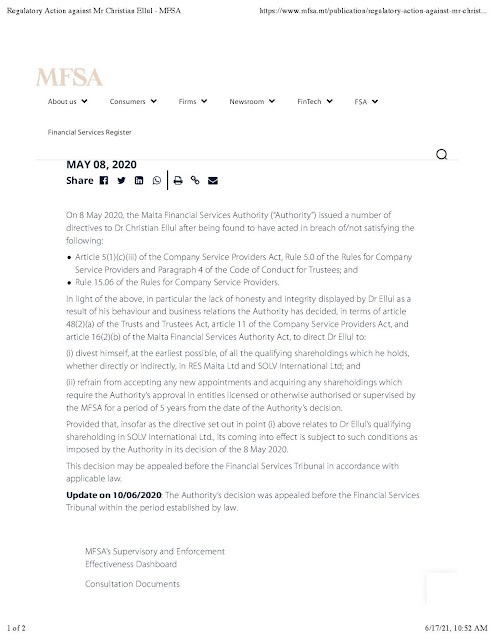 Nevertheless, since in this blog, we seek only truth, we shall respond.

(1) First of all, the evidence, which was attached to our article, speaks for itself, It came from an article on the subject published by the authoritative Jan Kuciak Investigative Center, which our readers are free to review on the Center's website, at http://www.icjk.sk  .

(2) Second, for Mr. Ellul to deny his involvement in the St. Kitts shell companies exploited by fraudster Kocner conflicts with his signature on a document sent to St. Kitts. Of course someone else formed those offshore companies, but Ellul was the known intermediary in Malta, according to the Center. He cannot say he had no knowledge, when he sent a document to St. Kitts, verifying information.

(3) Ellul denies that he was directly involved in the BOV accounts of his former father-in-law, but didn't he receive correspondence from the bank as the designated intermediary ? A Malta Today article mentions BOV in connection with his representation of his client. See In the Shadow of Kocner; Former Son-in-Law Challenges MFSA Ban. 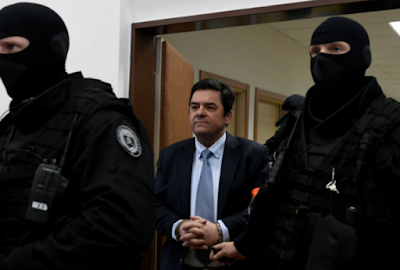 (4) Finally, he arrogantly claims the BOV bank statement is a forgery. Obviously, he is not familiar with BOV practices. The statements go out in window envelopes, and the word "Malta' is not within the window, so it does not forms part of the address. We also know that Malta-based intermediaries receive statements, rather than have them sent in international mail, for security purposes. His allegation that the lower placement of the word "Malta "is evidence of forgery defies reason, as well as known BOV bank practices.

Readers are urged to read the materials available at the Jan Kuciak Investigative center website, if they are looking for the truth about Kocner, and his relationship with Christian Ellul. In any other EU country, he would probably have already lost his license to practice law. Of course, in Malta, there is no meaningful professional discipline of advocates.

Personally, I'd sure like to know why he is taking all those trips to Marbella. Did Kocner secrete assets there ?