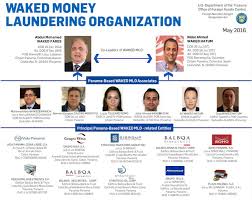 Abdul Mohamed Waked, one of the principals of what the US Department of Justice refers to as the Waked Money Laundering Organization, has reportedly filed a formal claim, against the Republic of Panama, for $165m in damages, for the loss of the Waked group's holdings, and lost profits. Two of the the Waked enterprises, a department store chain, and a shopping mall, were  removed from Waked control, after massive OFAC sanctions, and later sold, and Waked seeks the net profits held in escrow, by the National Bank of Panama.

The payment of that money is conditioned upon the removal of the existing OFAC sanctions currently in place, but the US District Court, in a well, reasoned 23-page opinion, entered Summary Judgment against the Wakeds, when they sought an order removing the sanctions, due to alleged Due Process and Administrative Procedure Act (APA) violations, which the Court rejected.

The Wakeds later filed an appeal to the Second Circuit, but most likely, the trial court decision will be affirmed, as it cited extensively to favorable decisions from the DC Circuit.
Posted by Kenneth Rijock at Thursday, June 08, 2017