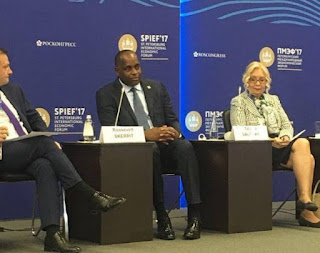 The Prime Minister of Dominica, Roosevelt Skerrit, attended the St. Petersburg International Economic Forum, while declining to attend a number of forums and conferences sponsored by European organizations, indicating that he has continued to focus on relationships with non-democratic regimes, both financially, as well as politically, notwithstanding that he presides over a constitutional democracy. Unfortunately, Dominica, under Skerrit, continues to restrict individual rights, and is fast sliding into the classification of non-democratic, strongman dictatorship. Apparently, Skerrit now includes Russia as an ideological ally, in addition to China and Venezuela, both of whi he maintains close financial, as well as political, ties.

Is Russia financially supporting the Skerrit government ? We already are familiar with the expanding presence of what are described as Russian organized crime elements in Dominica. including links to  reputed money laundering activities. While there is no reliable information available on the number of Russian "businessmen" who own Dominica's offshore banks, history shows us that Russians have been there before, with the banks, and remain in ownership and control, at this time. though specifics of their beneficial ownership remain opaque.

How many of Dominica's illegally-issued diplomatic passports are held by Russian nationals ? Some observers believe that this is the specific reason that Dominica's Minister of Foreign Affairs refuses to release the list of passport holders, correctly fearing that the disclosure will abruptly bring down the Labour Party-dominated government.

Back in 2014, when Francine Baron was the High Commissioner in London, Omar Murtuzaliev, a known Russian oligarch, was the Dominican Trade Attaché. Murtuzaliev listed his nationality as "Dominican" on UK company filings.


Finally, are Russian intelligence agents operating in Dominica, with the approval and protection of the Skerrit administration ? If sufficient funds have been covertly provided to Dominica's leaders, they may have no choice but to accept Russian influence, and associated intelligence-gathering activities, which will be interpreted as a clear and present danger by America's law enforcement, as well as national security, agencies, with unforeseeable consequences.
Posted by Kenneth Rijock at Saturday, June 03, 2017