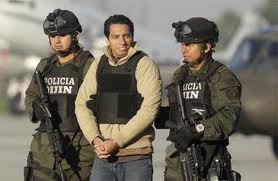 David Murcia Guzmán had his huge portfolio of Panama real estate holdings stolen while he sat in Colombian and American prisons. Conservative estimates by bankers who saw some of that money in transit indicates that he invested approximately $200m in condominiums, homes, office condominiums, luxury automobiles, and five yachts. The yachts alone are believed to have cost over $20m. Only one was recovered.

Here's what bothers me; all of his extensive real estate investments, held in the names of corporations with bearer shares*, appear to have been taken from him, in his absence. A complete list would only be known to Murcia, but so far, I have found that apartments in these properties were stolen from him:

Bearer shares, who were assigned for the limited purpose of property management, appear to have been fraudulently converted to fraudsters working with notary publics, who notarized signatures without seeing them personally executed by Murcia. Unfortunately, this type of corporate fraud is a common occurrence in Panama, targeting foreign nationals who place their trust in professionals who promptly steal their clients' property, and place it in their own names.

The property is then generally sold to third parties, who sell it to others, This apparently places the future owners in the legal position of bona fide purchasers,  extinguishing Murcia's claim to all his assets. Who benefitted from these thefts ? Murcia's closest known business associates were President Martinelli, and his business partner, Gary James Lundgren. They are known to have had access to the documents necessary to accomplish the unauthorised transfers of corporate ownership, and to have openly bragged about the millions of dollars that they were receiving from Murcia. Perhaps someone might wish to ask them.