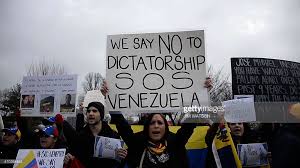 The Supreme Court of Venezuela has dissolved the National Assembly, the last elected branch of government that contained any elements of the opposition. The Court ruled that it, and President Maduro, will now assume the duties of the Assembly, which the Secretary-General of the Organization of American States (OAS) has said is a step on the road to dictatorship.

With this step, Venezuela has clearly placed itself in the category of unsuitable, when it comes to Country Risk. Any financial exposure, from parties outside the country, now carried extreme levels of risk, and since recovery, through the government-controlled court system discriminates against foreign companies and nationals, any new financial intercourse should be avoided, lest total loss occur at maturity, as legal remedies in the event of default will not be available.
Posted by Kenneth Rijock at Thursday, March 30, 2017