PANAMA CLAMPS DOWN ON NON-RESIDENT FOREIGNERS 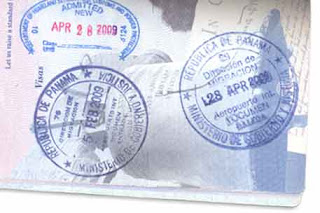 The Republic of Panama has begun strict enforcement of its "tourist" visa regulations. Until recently, foreign nationals did not need to obtain residency; they just lived in the country for the maximum six month permitted to tourists, and then exited the country, only to turn around and re-enter, being considered eligible for yet another six months. this fiction allowed foreign nationals to avoid the residency application process, and the white-collar criminal element living there, which could not pass the background check, ans was therefore free to engage in money laundering, or other financial crime. This abuse of the tourist visa will now come to an end.

This is not longer permitted; foreign nationals, residing pursuant to the tourist visa, now must remain outside of Panama for one month, to be allowed to return, as tourists. The old trick, skipping over to Costa Rica, and back, will no longer work.

Overstaying has serious consequences; "tourists" who stay past their required departure date are not allowed to exist the country, and are fined $2000 ; an expensive lesson about punctuality, I think. According to a notice, distributed by the US Embassy in Panama City, foreigners reentering Panama may be asked to prove that they are entering Panama as tourists, and not residing there.

The other problem is that tourists are not permitted to obtain Panamanian Driver's Licenses, and may only drive a motor vehicle in Panama for 90 days, with no exceptions. This rule obviously is intended to eliminate the ability of a "tourist" to secure full-time employment, or operate a business in Panama.

Whether the large number of Venezuelan money launderers, who regularly ply their dark trade in Panama City, and who reside in the capital for extended period of time, will be affected, is not known.