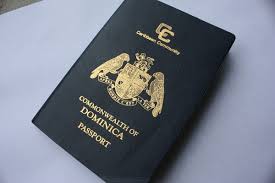 Readers of my articles will recall that I have repeatedly pointed out that Dominica's diplomatic passport program, which presents a clear and present danger of facilitating financial crime on a global scale, is not based upon any local laws or regulations. Last night, when I was a panelist on a talk program from the East Caribbean, discussing both CBI and diplomatic passport issues, a prominent Dominican developer, (Sam) when pressed by yours truly on the diplomatic passport program, brought out a newly-issued set of governmental guidelines, which he asserted now give the program a regulatory framework. I beg to differ, but I don't buy it.

Dominicans who have read and analyzed this 5-page document, which was reportedly drafted by a consultant, state that its content is on a elementary level, has no enforcement provisions, and is merely a set of good practices guidelines. In essence, it is a feeble attempt to legitimize an illegal program, which is in direct conflict with the requirements of the 1961 Vienna Convention on Diplomatic Relations, including:

(1) The use of non-Dominicans as "diplomats." This may only be done in extreme circumstances.
(2)  The failure to give these foreign diplomatic passport holders actual duties and missions.
(3) The failure of Dominica to accredit each "diplomat" to the country where he will be allegedly practicing diplomacy.
(4) The failure of these bogus diplomats to be presented & received at the country where they will be acting, and the acceptance of their credentials by the receiving country.

Sam, I also do not buy your argument, that Dominica is a poor country, which does not have the budget and resources to cover the globe with its diplomats, and therefore, it must rely upon foreign nationals to get out the word about Dominica, at their own expense. Dominica does not need a diplomatic mission in every distant and obscure country, and to argue otherwise betrays an alliance with powerful forces in Dominica that are only in the diplomatic passport issuance game for the money they can glean from it.

If Dominica cannot free itself of its illegal diplomatic passport program, then expect the bank compliance officers of the developed world to look very hard at any and all Dominican passports, presented at account opening, or for transactional work, as the word spreads of the misuse, by financial criminals, dodgy fraudsters, and the usual suspects, of passports from that country. If you haven't yet seen the rogues' gallery of Dominican diplomatic passport holders, known to have passports, read the article on the subject that came out a while back, in the Sun Dominica.

Does Dominica really want to be named & shamed, like St Kitts was, for illegal passport fraud schemes, which is what play-for-pay passports are regarded as, by compliance, as well as immigration, officers ?