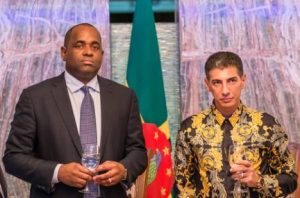 For public review, and after Antigua & Barbuda has agreed to release the names of all its diplomatic passport holders, it is important to analyze the reasoning of the Foreign Minister of Dominica, Senator Francine Baron, when she was asked, in open session of Parliament, to disclose the names of all persons, who are not members of Parliament, who have diplomatic passports of the Commonwealth of Dominica.

The minister's response, on the record:

"The government has never, as a rule, publicized sensitive details, outside of the corresponding countries to which persons are engaged. Effective foreign policy is never practised in the media or the public domain. While the government could have no diplomatic appointment and postings established, it remains opposed to the idea of divulging information, on all appointees, in a forum that is essentially public in nature, and which the entire world has access."

What the minister is saying, in plain English, is that persons who hold Dominican diplomatic passports, irrespective of the fact that they have no specific duties assigned to them, are not posted to any specific country or region, and have no mission or task to perform or fulfill, will not be publicly identified. Individuals who are sold diplomatic passports have no such bona fide duties or responsibilities whatsoever, but this seems to have escaped the honorable minister.

Let's consider that the 1961 Vienna Convention on Diplomatic Relations  requires:

What we have here are foreign nationals, who purchase Dominican diplomatic passports, but are never accredited to their home country, nor ever formally presented there, nor ever are recipients of written waivers, which authorize them to act as diplomats, for any purpose.

In truth and in fact, the vast majority of foreign nationals who are sold diplomatic passports, are not legitimate diplomats, as their "appointments," are VOID as a matter of law, not voidable, as they fail to satisfy the requirements of the Vienna Convention ab initio. I would certainly like to see any opinion of counsel, which the Government of Dominica, relied upon, before it started issuing these bogus passports, which are obviously no more than expensive toys, but have no legal weight.

Somebody, somewhere, acting as legal representative of the Commonwealth of Dominica, committed legal malpractice, by approving the sale of these pay-to-play passports, without considering, and implementing, the requirements of the Vienna Convention. The government refuses, without just cause, to name its so-called "diplomats," who do not have bona fide credentials in the first place, and its leaders think that they can flaunt the law so brazenly ? These spurious, invalid passports are a bad joke, played upon the people of Dominica, and represent a clear and present danger to the rest of the free world.