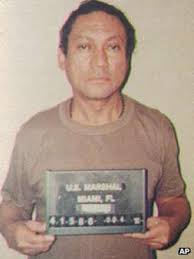 General Manuel Noriega, the former dictator of Panama, is in a drug-induced coma, in a hospital in Panama City, after suffering post-brain surgery bleeding. Noriega, who served prison time in the US for drug trafficking & money Laundering, and additional time in France, also for money laundering, has been serving a 20-year sentence in Panama, for multiple homicides. He had been released from prison, to undergo surgery for a benign brain tumor.

Noriega's attorney says he client is not longer bleeding in his brain, but will continue to be kept in a coma for the next five days, as a precaution.
Posted by Kenneth Rijock at Wednesday, March 08, 2017